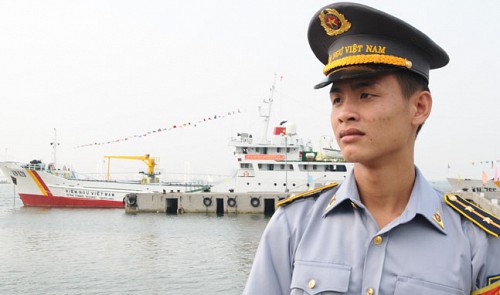 A fisheries surveillance force, the first of its kind in Vietnam, made its debut in a ceremony held in the central city of Da Nang on Tuesday.

The force, under the Ministry of Agriculture and Rural Development’s Directorate of Fisheries, is tasked with detecting, controlling, and handling violations of Vietnam’s fisheries laws and regulations that occur in the country’s sea areas. It will also help ensure safety for fishermen and their vessels at sea as well as monitor and manage the country’s fisheries resources. The ceremony was attended by Prime Minister Nguyen Tan Dung, Deputy PM Hoang Trung Hai, and representatives from many other ministries and agencies.  Addressing the ceremony, Deputy PM Hai lauded the agriculture ministry and the Ministry of Defense for their efforts in building the force. He asked the agriculture ministry to coordinate with relevant agencies and localities to direct the force to fulfill the entrusted tasks in accordance with local and international laws.A central agency with four units The fisheries surveillance force comprises a Fisheries Surveillance Department, which is located in Hanoi, and four sub-departments, said Nguyen Ngoc Oai, the department’s head. These sub-departments will be stationed in areas along the country’s coast from northern Quang Ninh Province to southern Ca Mau Province, Oai added. In the near future, the force will set up hotlines for the department and its sub-departments, the official said. “Whenever fishermen want to seek help with any problem they may face at sea, they can make phone calls to the hotlines to get support from the units,” he added.             Sovereignty defense Deputy PM Hai emphasized that the establishment of the fisheries surveillance force is a reiteration of Vietnam’s sovereignty rights and jurisdiction in the East Sea. The most important duties of the force are to safeguard the country’s sovereignty and ensure safety for fishermen and their vehicles in the country’s sea areas, the official said. The country now has about 1 million fishermen along with 120,000 fishing boats operating at sea, Deputy PM Hai said, adding that the fishing industry has been regarded as one of the key economic sectors in Vietnam. In the coming time, the force will submit to the government a plan for its development from now until 2030, said Cao Duc Phat, Minister of Agriculture and Rural Development. The plan will include measures to provide more support for fishermen when they fish in Vietnamese seas, the minister said.Force welcomed by fishermen  Many fishermen have told Tuoi Tre that they are very happy to hear of the establishment of the fisheries surveillance force. Le Van Sang, a fisherman who owns a fishing boat in Da Nang City, said that he and his colleagues used to avoid Chinese marine surveillance boats when seeing them in Vietnam’s waters. “Now that Vietnam has a fisheries surveillance force, we will feel safer to fish in our waters without worrying about foreign boats,” Sang said. Another fishing boat owner, Nguyen Minh Vuong, of south-central Binh Dinh Province, said, “We used to be fearful of harassment by foreign vessels. They intimidated us and cut off our nets. Without any protection, we had to leave our fishing grounds. Now that the fisheries surveillance force has been set up, we can call them for help.”    A fisherman in central Quang Ngai Province’s Ly Son Island, Duong Huong, who has been illicitly detained by Chinese boats many times, said, “The fisheries surveillance force will help prevent Chinese boats from encroaching on Vietnam’s seas for illegal fishing.”       Minister Phat said that in 2013, the ministry sent 100 boats to control fishing activities at sea and caught many foreign ships intruding into the country’s territorial waters. All these foreign vessels were driven away, he added.