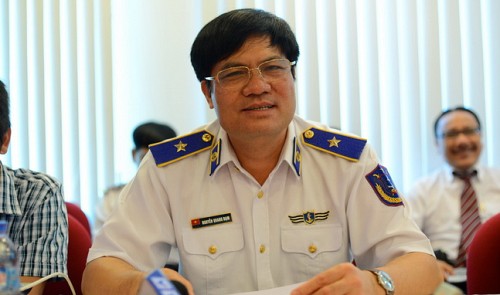 China’s deployment of warships and aircraft to protect its illegal drilling rig Haiyang 981 in Vietnamese waters in the East Vietnam Sea runs counter and is unacceptable to international practices, according to the chief of the Vietnam Coast Guard.

Major General Nguyen Quang Dam, commander of the Vietnam Coast Guard, made that statement during an online chat with Tuoi Tre newspaper readers in Ho Chi Minh City on Wednesday, in connection to the Chinese-run oil rig and how the Vietnam Coast Guard has dealt with aggressive acts from dozens of Chinese ships at the scene.

The official said there has been no sign of the Chinese ships withdrawing from the scene so far.

He affirmed that over the last week, China has deployed 70 to 80 vessels and aircraft to protect operations of the rig on a daily basis, adding the Chinese vessels are always ready to ram or fire high-power water cannons at Vietnam Coast Guard ships and the Vietnam fisheries surveillance force, which are trying to persuade the Chinese side to remove its rig from Vietnam’s exclusive economic zone and continental shelf.

“Their violent acts have posed serious threats to the lives of Vietnamese members of law enforcement,” Dam said, expressing his concerns.

He also criticized China for having ignored reactions from the international community and seriously violating Vietnamese and international laws.

The Vietnam Coast Guard chief said that China, as a permanent member of the United Nations Security Council, is aware that their acts have breached the 1982 UN Convention on the Law of the Sea.

With regard to a recent false accusation from China against Vietnam, Dam said Vietnam only tells the truth and respects the truth.

In an international conference on May 8, China alleged that Vietnamese ships had rammed Chinese vessels 171 times in five days from May 3 to 7 but failed to provide any evidence.

“We would like to send China the message that what Vietnam is doing is legal and out of respect for the long-lasting friendship between the two countries as well as to ensure stability in the East Vietnam Sea,” Dam said.

“The Vietnam Coast Guard will do its best to protect the country’s sea and land sovereignty and will make no concession to China’s wrongful acts,” he asserted.

The attacks came when the Vietnamese side was trying to persuade the Chinese to remove their oil rig from Vietnam’s exclusive economic zone and continental shelf.

The Chinese rig is now located at 15°29’58’’ North latitude and 111°12’06’’ East longitude in the East Vietnam Sea, about 119 nautical miles (221 km) from Ly Son Island off the central Vietnamese province of Quang Ngai and 18 nautical miles south of Tri Ton Island of the Southeast Asian country’s Hoang Sa (Paracel) archipelago. This location, announced by the Chinese, is within Vietnam’s exclusive economic zone and continental shelf, according to the Vietnamese Ministry of Foreign Affairs.