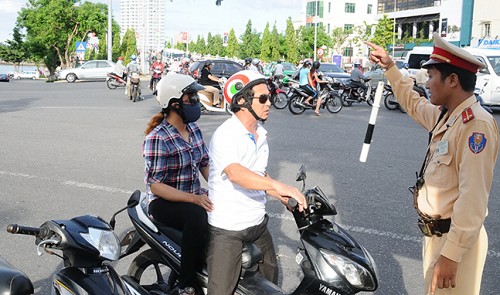 There is a city in Vietnam where non-native traffic violators are allowed to go without receiving a cash fine or having their driver’s licenses confiscated after getting kind guidelines from local police.

A Vietnamese netizen wrote on the forum Otofun, “This is a typical example that civilians want traffic cops [in other areas] to follow.” About two weeks ago, two traffic policemen in the central city of Da Nang whistled to stop a 30-seat coach after it ran on the Han Bridge which forbids vehicles with 30 seats or more. However, the coach driver failed to hear the police whistle because of the crowded street then. The cops pulled the vehicle over after it passed the bridge. To many people’s surprise, the police officers let the coach driver go after realizing he hails from the Central Highlands province of Lam Dong.

“This violation is subject to a fine of VND1 million (roughly US$50) and the violator will have his license revoked for one month in line with the law,” said Sergeant An, one of the two traffic cops. “Since the driver comes from another province, we did not give out any penalty and let him go,” An added.

Huu Cuong from Hanoi said he was once taken aback by the good behaviors of the Da Nang traffic policemen when a car carrying him and a friend from Hoi An Ancient Town in neighboring Quang Nam Province mistakenly traveled on a one-way street.

“The cops immediately showed up. After checking our car documents and understanding that we are from Hanoi, they just reminded us of traffic rules and allowed us to go,” Cuong recounted. The Hanoi citizen later shared his own memorable experience on social networking sites. His story has attracted much attention and been widely circulated.

Xuan, who has sold beverages at a location close to a traffic hot-spot on the western part of the Han Bridge over the last 24 years, told Tuoi Tre (Youth) newspaper that traffic law breaking acts such as mistakenly traveling on banned roads or wrongly running on the Han Bridge are no longer punishable.

“Most of such violators are given a break,” she said.

It is a city policy that visitors or those coming from other localities will be given guidelines instead of being punished when they violate traffic laws in Da Nang because they are not familiar with the streets here, said Lieutenant Colonel Tran Viet Thanh, a traffic police officer in the central city.

But traffic offenders will be seriously penalized if they are locals, Thanh underscored.

There were times police in Da Nang recorded up to 15 traffic violation cases per day committed by vehicles from other provinces and cities, mostly from Hanoi and Ho Chi Minh City, according to Tran Quoc Binh, another local traffic cop.

“Since they were not conversant with road directions, we just gave them warnings,” Binh said, adding, “We will not receive respect from such traffic violators if we mete out punishment to them.”

“It is a way to build reputation for Da Nang in the eyes of friends coming from everywhere,” said Senior Lieutenant Colonel Le Ngoc.

Ngoc elaborated that traffic policemen who are polite and friendly to civilians and visitors would be hailed for their good behaviors in internal regular meetings.