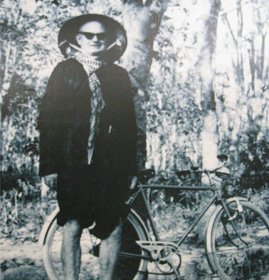 Vindication for vilified Australian journalist known for his political leanings

HANOI – George Burchett was sitting at a garden café here, reveling in a childhood memory. He grinned as his hands mimicked the motion of a fast two-finger typist, his voice clicking like pocketa-pocketa….

We had been talking for a couple of hours about his father, Wilfred Burchett, the “rebel” Australian journalist whose nose for news and moral compass took him on a provocative course along the front lines of history until his death in 1983, not long after he finished his last book, “Shadows of Hiroshima.” He had long since become widely known for his political leanings while covering the wars in Korea and Vietnam. The West’s anti-communist fervor in the 1950s and ‘60s was such that Australian authorities effectively exiled Wilfred for 17 years, refusing to replace a passport that had ominously disappeared. The character assaults persisted much longer.

“It was Australia’s longest war – the war against Wilfred Burchett,” George said. “I consider myself a veteran of that war.”

Three years ago, after decades of defending his father’s honor in Australia, Burchett organized a Hanoi retrospective of Wilfred’s career timed with the 100th anniversary of his birth. He felt so welcome and so “at home” that he and his wife Ilza decided to move here from Melbourne. Their son Graham, a filmmaker who was born in Sofia, Bulgaria and raised in Australia, has also relocated to Hanoi.

So it was with no small sense the satisfaction and vindication that George recently traveled back to Melbourne to attend and speak at a ceremony that marked his father’s induction in the State of Victoria’s Media Hall of Fame.

Even this institution, George mused, might have exiled Wilfred if not for his first great scoop at the end of the Second World War. While other correspondents were covering Japan’s formal surrender on the battleship Missouri, Burchett characteristically broke from the pack and became the first foreign journalist to lay eyes on the devastation of Hiroshima. His famous dispatch was titled: “I Write This As A Warning To The World.”

George Burchett, 59, is an artist whose work explores political themes – and he likens his father’s journalistic gifts to those of a great, perceptive artist like Picasso.

The son speaks of his father with conviction, wit and a continental accent that is hard to place – the legacy of childhood and youth that journeyed from Hanoi to Moscow to Phnom Penh to Sofia, where he studied art and met Ilza. “I don’t have an accent in French, Russian or Bulgarian,” he says. (His Vietnamese, however, may not be better than my “taxi Viet.”)

As with his father, the phrase “citizen of the world” seems apt. There can’t be many other middle-aged foreigners living in Hanoi who were actually born here. The second of three siblings – his older brother was born in Beijing, his sister born in Moscow – George was born about a year after his father first met the Vietnamese President Ho Chi Minh during the war against the French.

While Western authorities loathed Wilfred’s political leanings, many fellow journalists admired his independence, distinct perspective and ability to break news – and get it right. His work, such as the stories about the Americans’ use of chemical weapons in Vietnam, won more notice as the West’s anti-war movement gained strength. His Australian passport was restored only after Australia politics shifted to the left and elected Labor Party leader Gough Whitlam as prime minister in 1972. In a note to Wilfred in 1974, Whitlam wrote: “…your own vigorous brand of journalism has done much to keep alive a fundamental goodwill towards Australia and ensure the changed emphasis in our foreign policy.” In his own reflections, Wilfred Burchett expressed satisfaction in having achieved “a sort of journalistic Nirvana, free of any built-in loyalties to governments, parties, or any organizations whatsoever. My loyalty was to my own convictions and to my readers.”

I couldn’t help but reflect how my own late father, a career Marine, and Wilfred Burchett had been at the battle of Okinawa at the same time. Before the war he had previously served as an embassy guard in China, survived the attack on Pearl Harbor, and briefly visited Nagasaki while serving in the occupation of Japan. My dad was a good man and good father – but never much of a storyteller.

The story of Wilfred’s adventures was such that it took me a while to realize I had neglected to ask his son a basic question: What was he like as a father?

The reply came in an email: “Well, he was away a lot, but when he was around the world became bigger and brighter… The house would fill up with visitors from all corners of the world: fellow journalists, diplomats, activists, artists, writers… One of his most endearing qualities was his unshakable faith in humanity that he retained to the end, despite all the horrors and wars he had witnessed and reported. There was not a drop of cynicism in him.”

Another reason George had his back.