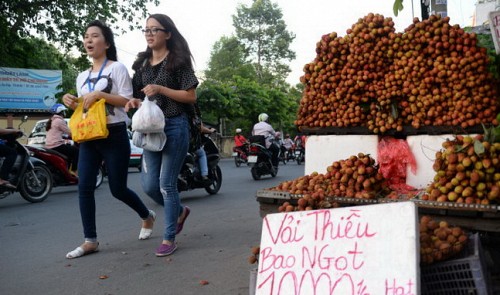 The heavier something is, the more it costs, so some vendors in Vietnam have come up with myriad methods to manipulate the weight of their products to dupe consumers.

The tricks silently ‘pick-pocket’ buyers every day, even though consumers have the right to stop buying from such dishonest vendors.

In streets and markets across Ho Chi Minh City, it is easy to see fruits on sale along with their stalks and leaves, all of which will be put on the scale, and buyers have to pay for these inedible parts of the fruits.

“I bought some litchis at the Nguyen Tri Phuong market a few days ago and realized later that the stalks and leaves alone weighed nearly 300g,” Do Nguyen, a District 10 resident, told Tuoi Tre(Youth) newspaper.

However, a vendor at the market said she had to do so because “many customers want the fruits to have many leaves and stalks so they will make beautiful gifts to give away.”

“It is difficult to find buyers for the second type as customers will complain they are ugly and not fresh,” a street fruit peddler said, in explaining why fruits sold with the correct weight are cheaper than those with the manipulated.

For vendors of seafood such as blood clams, mixing the cockles with mud is the trick to increase their weight.

“There is an average of 100g of mud in every kilogram of blood clams,” N., a seafood trader in the southern city of Can Tho, toldTuoi Tre.

N. added, however, that she did not make up the trick on her own.

“I source seafood from traders in the central region and they only sell mud-covered products,” she said.

N. said she had to “play the game,” and make up for the money spent on buying the mud by applying the trick to her customers.

“If you want to buy cockles without the mud, you have to pay more,” she said.

“But many people still agree to buy the clams with mud to enjoy the cheap prices.”

Chicken sellers in Can Tho also have a way to manipulate the weight of the poultry.

There is a makeshift market that sells “home-raised” chickens near Ba Bo Bridge on Nguyen Van Linh Street, where those on sale usually have their stomachs filled with rice and banana to become heavier.

Nguyen Nam Trung, a local resident, said he usually buys chickens from the market as it is close to his house.

“I bought one to organize a party the other day, and what I found after cutting the chicken open was a stomach full of banana,” he said.

“I came back the following day to complain but the vendor had disappeared.”

T., who used to sell poultry near Ba Bo Bridge, revealed that each of the chickens will be filled with 100g of banana to increase their weight.

The disadvantage of the trick is that the overfed chickens may easily die.

“But then they will be slaughtered and sold as ready chickens, and traders will never incur losses by all means,” T. said.

​Paragliding a new drawcard at one of Vietnam’s greatest passes

Khau Pha Pass, deemed one of Vietnam’s four most spectacular passes, is now not only about breathtaking scenery but also the chance to take an exhilarating ride on a paraglider.