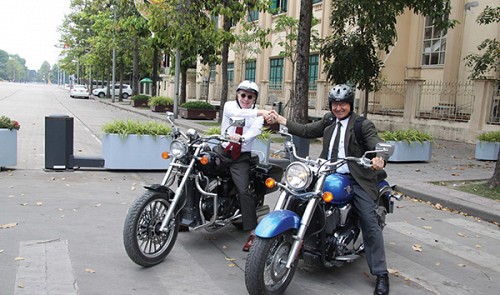 Editor’s note: Riding a motorcycle and wearing a T-shirt with the slogan "Tôi không phải người nước ngoài" (I'm not a foreigner), Swiss Ambassador Andrej Motyl has lived in Vietnam for four years in the fullest way. Before finishing his term, he has shared with the weekend magazine of Tuoi Tre (Youth) newspaper his experiences in Vietnam, as well as thoughts on the future of the country. His writing is in French, and Tuoi Tre News would like to present it in English to you, readers.

A people living with their sweat

My four-year term in Vietnam comes to an end. This beautiful country deeply impressed me and became a part of my personality.

The first images that I keep are the women who do their morning exercises serenely and happily, or people rushing on their motorcycle. It seems that in Vietnam, everyone has something to do. There’s no stagnation here.

Vietnamese people respect family very much; sometimes several generations live under the same roof. Everyone saves money to fund their children's education. They are studious people. Like the Swiss, you are a people who live with their sweat. That is why, from the beginning of my mandate, I decided to develop cooperation between the best universities of the two countries to bring to young Vietnamese better conditions of study. The most successful is the collaboration between the Swiss Federal Institute of Technology Lausanne (EPFL) and the Vietnam National University – Ho Chi Minh City. EPFL is the “sister” of the University of Zurich, where Einstein studied. Both schools are part of the top of all the world’s rankings. Like me, Professor Patrick Aebischer, President of EPFL, fell in love with Vietnam and the dynamism of its people. In 2013, the Asian Center for Water Research was established in the Ho Chi Minh City University of Technology under the cooperation of the EPFL and other francophone universities. Why water? You may not realize it, but Vietnam is immensely rich in water, richer than any country I've seen. Before coming to Vietnam, I was in Sudan, a vast country with only the Nile, the rest being almost exclusively sand. In Vietnam, there is water everywhere, but the country faces enormous challenges related to water, including pollution and a waste of water resources. By necessity, or even to survive, Vietnam must become a world expert in this field.

With Professor Phan Thanh Binh, President of the Vietnam National University – Ho Chi Minh City, Professor Patrick Aebischer and I wish to expand cooperation in biomedicine. Lausanne is a center for major global companies, which EPFL maintains numerous collaborations with, both in research and application. We hope to create such a center in Vietnam under the name of Dr. Alexandre Yersin, whom all Vietnamese have heard about, but few people know that he was Swiss. Having studied in Lausanne, he later went to Paris, and then became a student and collaborator of renowned chemist and microbiologist Louis Pasteur before coming to Vietnam to work for the colonial government. He was a specialist in biomedicine, a field in which Switzerland and Vietnam could now develop a true mutually beneficial partnership. Vietnamese professors are familiar with tropical diseases such as dengue and malaria, much more so than their Swiss counterparts. With Vietnam, Switzerland could help prepare human resources to better defend against various diseases.

Why does a good horse run slow?

In the eyes of Swiss companies, Vietnam is an attractive market with 90 million people, a young population, and a middle class that has awakened. However, to attract investors, the country still has much to do in terms of administrative reform and transparency. If there is transparency, we see immediately where the problem is and find a solution. Another thing in my mind that Vietnam has not done as well as it could is when it comes to the privatization of state companies. Privatization means selling companies to businessmen from the private sector who can effectively run these companies, something more worthwhile. What Vietnam is doing is "equitization", redistributing and privatizing for the benefits of the people who have already had a relationship with the companies. This is not how we create new companies. It's just changing the legal framework, and it is still a subsidy system. I often call on the Vietnamese government to find Vietnamese and foreign strategic partners which are able to find niches, and identify profitable companies to continue investing in. It is clear that at present, many state companies must disappear because they are not at all competitive. They cannot live only through grants and subsidies, which means taking money from those who deserve it and distributing it to those who do not deserve it.

Vietnam aspires to become a more liberal economy that adapts better to the market from a centralized, planned economy. I think there is no other way than to learn from those who have succeeded: Korea, Singapore and Poland. We must drastically reduce the number of unqualified people in the state apparatus and keep only the best and most motivated, and double or triple their salaries. Currently, Vietnam is like a horse that must carry a heavy burden, and you wonder why it only runs at 30km/h, yet it is a good horse. Remove his burden, and he will be twice as fast. I am convinced that in 10-15 years, Vietnam could catch Singapore and other developed countries, provided you redouble efforts to move forward, not just maintaining the current level.

I became a child

For four years, I have been a Vietnamese who travels by motorbike. At every red light, I turn left to right to greet passers-by. Men make comments on the mechanics of the bike, encouraging women and children to smile and say hello to me, "ông Thụy Sĩ" (a Swiss man). My family has traveled to 35 provinces. My 16-year-old son is studying here. With my wife, we used all of his vacation to travel in Vietnam. This country is a subcontinent. In the north, you have mountains that resemble the Swiss Alps, the Red River Delta, plains, hills, and forests. The southern region has the Mekong Delta, which is perhaps the most fertile land in the world, with three harvests per year. You have caves, beautiful islands. We probably had our best experience in Cuc Phuong National Park, where we walked 16km of virgin forest for three and a half hours. I do not forget Cat Tien National Park, Phu Quoc, Con Dao, Ha Long Bay and Tam Coc-Bich Dong (in Ninh Binh Province). It's a dream! You might be in a bad mood when you arrive there because you have too much work, but all this fades away after only an hour. It is medicine! In Vietnam, I became a child fascinated by the discovery.

I have great admiration for Vietnamese women. When I see them working in the fields, transporting their children to school before going shopping and going to work, I think that may be because this country has experienced so many wars, men were at the front all the time, so women have become entrepreneurs everywhere. Once I watched a street sweeper work for a long time. I felt like she put her heart into her work, as she looked happy. Nowhere else have I seen sweepers who work with as much dignity.

The Vietnamese are a strong people, without rancor. You don’t forget but you do not want to mention again the suffering of the past. I believe that Senators John McCain and John Kerry were deeply impressed by the welcome that people reserved for them. I have been all over this country, and everywhere, we smiled. This makes me remember that physically, except that I am 185cm tall and that I have a reddish face and a large nose, I am totally Vietnamese.

When I arrived here, I saw in the garden of my residence on Dien Bien Phu Street in Hanoi a bronze bust. I did not know it was Alexandre Yersin, who had found the plague bacillus. With all that I have lived through in Vietnam and learned from his life, I understood why he had chosen the country as his last home. And that dream of Dr. Yersin, which can be considered a human bridge between Europe and Asia, is completed. I asked the president of the Socialist Republic of Vietnam, Truong Tan Sang, to consider and grant "honorary Vietnamese nationality" to Alexandre Yersin.