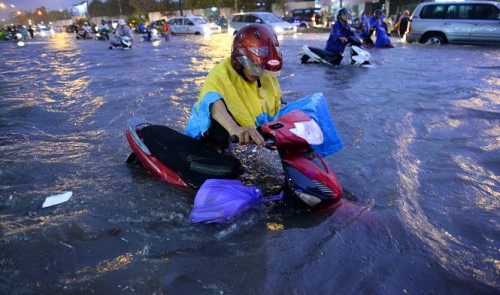 Using water-absorbing materials to construct roads is one of the recommendations foreign specialists put forward at a meeting organized in Ho Chi Minh City on Tuesday to seek solutions for curbing inundation.

During the meeting, which was chaired by Secretary of the municipal Party Committee Le Thanh Hai, Taiwanese Professor Tsai I Chang, pointed out that the city’s population has increased by five times from 1975, which causes wastewater volumes to rise correspondingly.

But the sewerage system has not been improved or reformed properly to meet the increasing need of water drainage.

In order to cope with floods, dams and reservoirs should be built to store floodwater, especially in low-lying areas, and rivers and canals should be dredged regularly to smooth its currents, the professor said.

However, due to the impacts of climate change, the two plans should be modified and supplemented to fit actual conditions, he said.

Kanedo, a Japanese expert, said that in Japan a number of recreation venues have been built in a manner that such facilities, such as tennis courts, can be used as places to contain water for anti-flood purposes.

Even tunnels for vehicles can also be utilized to store floodwater, the expert said.

Kanedo and Tsai shared the same recommendation that water-absorbing materials should be used in building roads and sidewalks as a measure to prevent inundation during heavy rains.

Meanwhile, Olaf Jue Hner, an expert from Europe-based Ramboll Group, warned that the random leveling of canals as part of urbanization plans may force Vietnam to pay a high price in the future.

There was a case in which a European country had to pay more than US$5 billion to recover the rivers and water-containing works that had earlier been filled up, Hner said.

In order to mitigate the impacts of floods on everyday life, an early warning system should be set up to provide flooding forecasts for everybody through the Internet or cellphones, Kaneko advised.

To this effect, a rain forecasting system with the highest possible accuracy should be established, he added.

The official said that he will ask the Ho Chi Minh City People’s Committee to consider and apply the most suitable suggestions.

Talking to Tuoi Tre (Youth) newspaper on the sidelines of the meeting, Nguyen Ngoc Cong, director of the Anti-Flooding Program Operation Center, said that  three reservoirs aimed at preventing flooding will be built in three districts next year at a total cost of about VND1.3 trillion ($57.2 million).

The three lakes, to be built underground in District 4, Tan Binh District, and Thu Duc District, are part of a master plan to construct 103 reservoirs of this kind, 875 hectares in area, across the city during the 2016-20 period, the center said.