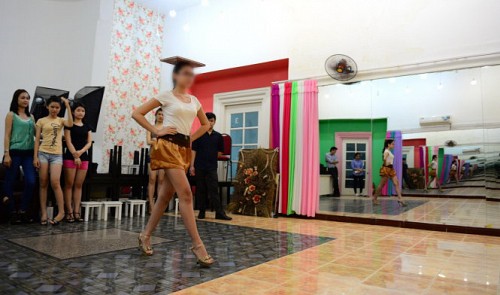 A number of parents in Vietnam now send their teenage children to model training centers in support of their dream of strutting down the runway.

At those centers, participants under 18 account for around 30-40 percent of enrollments, 20 percent of which are aged 13 or 14.

The operational criteria of each center is different, for example, the Young Model Club of the Youth Culture House in Ho Chi Minh City only receives learners above 15 while other places accept trainees under that age.

The Tay Nguyen Film Company in District 5, Ho Chi Minh City even has a 3-year-old .

On a rainy October afternoon in the city, dozens of model training centers are crowded with hopefuls flocking to pursue their catwalk dream.

Many of them are teenagers, with the 13- and 14-year-olds generally accompanied by parents.

After arriving at the Ruby center in District 1, the young trainees gently reset the foundation partly washed away by the rain, put their high heels on, and then quickly get in line, ready to be a model.

With music on, the young girls balance books on their head while learning to walk the model’s walk.

Finishing the lesson on catwalk skills, the class turns its focus on posing.

In the time it took for one song, the young models-to-be adopted multiple poses and changed their facial expression accordingly.

“I love wearing beautiful outfits, being photographed and watching fashion shows,” Dang Thi Bao Ngoc, a 13-year-old trainee, said. “I want to be a professional model when I grow up.”

Ngoc said she found information about the model school on the Internet and asked her parents if she could join.

After three months, she said she felt more confident.

“The way I walk and sit has changed a lot,” she said. “I also know what to wear to be more fashionable.”

“I like to draw the attention of people when I’m on the street,” she confirmed.

When asked about her preference between schooling and modeling, Ngoc said she is now placing priority on the former though she prefers the latter.

“If I have a chance to be a model, I would love to be a mature one without scandals,” she added.

Unlike Ngoc, 15-year-old Minh Trang has recently realized the career of her dreams when her father sent her to the center in the hope that she would develop a better gait.

“I have realized my passion for modeling,” Trang said, explaining how she knows it is the case, and that she would still love to be a celebrity despite many models being involved in scandals.

Meanwhile, in a class at the CA3 model school in District 4 taught by Thanh Vy, an emerging face on social media, students are taught how to pose in front of a mirror, as well as how to apply make-up for photos.

In addition, students are even taught how to attract more “likes” on social networks to draw the attention of brands.

A number of the class’s trainees are of middle school age and watched by their accompanying parents.

M.K., 13, expressed her hope of improving her knowledge of the fashion world and achieving greater confidence through attending the school.

“My parents have not set any target, they think it’s OK for me to learn more things,” she said, adding that she and her younger sister, 8, were sent to the center by their parents in the hope of obtaining more life skills and a knowledge of fashion.

What do parents say?

A representative of one center said that students were sent to those classes by middle-income parents who could afford the VND3 million (US$134) cost for 8 sessions per month.

Most have shown their complete support for their children chasing a dream.

My Trinh, mother of Minh Trang, said the whole family wants Trang to be a model. And that was why she took her daughter to several model training centers.

Her father has also talked to her in preparation for the obstacles she would come across throughout her career.

“I don’t have prejudice against any kind of job, but modeling really contains temptations,” she said. “My daughter is too young and I can’t explain to her the other side of the spotlight, however, if she really has a passion for it, I will never extinguish her dream.”

It is not only parents in Ho Chi Minh City who are in support of these dreams, those in neighboring areas have also devoted themselves to helping their children achieve similarly.

Twice a week, a 13-year-old trainee has been accompanied by her mother from Bien Hoa City to a center in Ho Chi Minh City 35km away.

In the same way, even older generations have joined the cause.

Nguyen Thi Dung, 62, moved from the southern coastal city of Vung Tau to Ho Chi Minh City so that she could easily follow Hoang Nhu, her 19-year-old grandchild, who is learning to model at a center in District 4.

“It doesn’t matter how hard it is to me,” the devoted grandmother stated, saying her grandchild had displayed talent and loved modeling since she was nine or ten.

“People said it’s not good doing this job, but I think not all models are bad,” she told Tuoi Tre (Youth) newspaper reporters.

Dung also revealed that her grandchild was recommended to the center by local model Xuan Lan, who was touched to see Nhu crying when she missed the chance to participate in Miss Universe Vietnam 2015, which concluded earlier this month.

Meanwhile, other parents said they will continue to keep an eye on their children in order to steer them away from the temptations synonymous with the career.

Ngoc Nhung said she would stop her daughter from attending if she thought the lessons were inappropriate or if her daughter stops enjoying it.

As someone who used to be a dancer, she said she knows about the temptation in showbiz very well.

“I want my child to rise to fame from her own ability,” she added. “If she has an instinct and faith to the profession, she should follow it.”

To other parents, sending their children to those centers means equipping them with life skills.

“The more they know, the better they are,” one said.