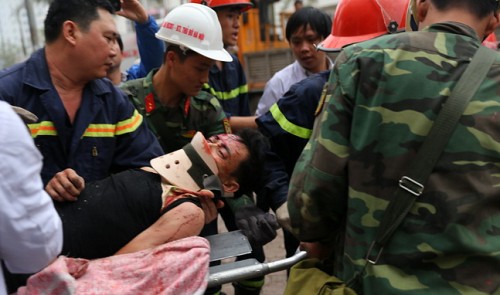 A suspected bomb went off on Saturday in Hanoi, killing four and injuring six others.

The location of the explosion, which happened at 3:00 pm, is the Van Phu residential area in Ha Dong District on the outskirts of the Vietnamese capital.

Witnesses at the scene reported to have seen a scrap vendor who lived in the area carrying an object shaped like a 12kg gas tank out on the sidewalk of his scrap procurement shop prior to the explosion.

The man was reportedly sawing the object when it went off, leaving a 3m2-wide crater on the sidewalk.

The explosion completely destroyed the ground floor of the shop, while damaging 36 other apartments in the area as well as numerous passing vehicles.

Four were killed in the deadly blast, including the scrap vendor and some passers-by, while six others were wounded and immediately hospitalized.

Among those losing their lives were a 31-year-old mother and her 7-year-old daughter who were passing by the site at the time of the explosion.

Tuoi Tre (Youth) newspaper sources disclosed that the object might have contained explosives, and could have been an undetonated wartime bomb.

Dismantling wartime bombs for a living is common in Vietnam, and has led to heartbreaking deaths in the Southeast Asian country.

Residents living as far as 4km away from the scene reported to have heard the explosion loud and clear, while those within 100m from the explosion could feel its fierce impact.

Bui Van Luong, who was stopping by his friend’s house 100m away from the explosion, said he heard a loud bang, and glasses everywhere were shattered.

“People rushed out on the street, and falling motorbikes and fire were all over the place. A truck crashed into a tiles shop, and the driver and a woman in the cabin were seriously injured,” Luong recalled.

Nguyen Thi Bac, a shop owner living near the scene, said, “I was sitting in my shop when I heard what felt like a bomb going off. I was thrust away by the impact, the glass doors on my second floor shattered, and flowerpots thrown to the ground.”

“Everything was chaotic. Women and children rushed to safety, as we saw several other hazardous objects were still inside the scrap procurement shop,” Bac said.

Police and emergency responders arrived by the hundreds at the scene shortly after, and survivors were instantly hospitalized.

Military demining forces were also called to the scene to search for any more potential risks.

Following the incident, Secretary of the Hanoi Party Committee Hoang Trung Hai visited the victims in hospital and provided them with initial financial assistance from local authorities.

Later the same day, Deputy Prime Minister Nguyen Xuan Phuc directed relevant bodies to provide support for the affected families and quickly carry out an investigation into the cause of the blast.

At a review hearing on Wednesday, the Judge’s Council of the Supreme People’s Court has canceled both verdicts on a man who spent 10 years in jail on a life sentence for a murder he apparently did not commit

In Vietnam, mobile users have to provide portrait pic to legally own SIM