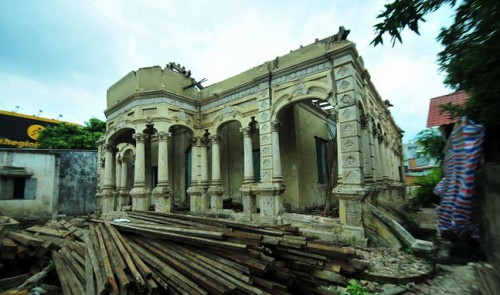 A run-down European-style villa built in Ho Chi Minh City last century was torn down by its owner amid safety concerns, while city authorities blame a lack of legal grounds for belated conservation plans.

Situated at number 237 No Trang Long Street in Binh Thanh District, the villa in question was built in the early 1920s during the French colonial period, and is one of the very few old villas left from then in the city.

According to a book recently published by Vietnamese journalist Pham Cong Luan, the owner of the house is Le Minh Tri, whose family had owned many villas of similar scale in what was then known as Saigon.

The villa is described by Luan as having been “built on high ground formed by pouring thousands of cartfuls of ox-driven dirt, and was the most majestic and beautiful house” in the area.

Reporting from the villa’s location on Sunday morning, Tuoi Tre(Youth) newspaper reporters saw demolition work being halted and groups of workers unwinding at a nearby coffee shop while officials from Ward 11, Binh Thanh District, made a record of the scene.

Sau, who represented the owner of the villa, said demolition work had started three days before.

When asked about permits, Sau said that for ten months he had knocked on the doors of government bodies of multiple levels to apply for a license to demolish the villa and build a new one without success.

As the house was uninhabitable with many parts at risk of collapsing, Sau said he had taken the matter into his own hands and commenced demolition without permission.

He added, however, that all work had been temporarily postponed following orders from the ward's authorities to maintain the status quo while waiting for directions from district and municipal officials.

As of Sunday morning, the villa’s entire roof and all its windows had been removed, the walls halfway demolished, wood planks that were once part of the villa’s frame piled up at the front yard, and all that was left of the hallways reduced to battered columns.

After ward officials finished their paperwork, all demolition workers were told to go home.

A senior official at the Binh Thanh District People’s Committee said on the same day that all demolition works of the villa had been halted in accordance with requests from the municipal Department of Planning and Architecture and the Conservation Council.

Lack of legal grounds for conservation

According to Vietnamese regulations, villas in the country are classified into three categories, each being monitored by a different set of rules and guidelines.

The first group consists of villas which have both historical and cultural value, and are seen as representative of a unique architecture. The owners of these residences are not allowed to reconstruct or alter any part of its interior design or architectural structure.

Villas listed under the second group also hold historical and cultural value, and can help owners make a profit. Owners of these houses are banned from altering their exterior designs, but can freely refurbish their interior.

The remaining villas fall into the third category, as they either hold little historical or cultural value or have already had their style altered. These homes can be demolished and replaced by new constructions.

According to a member of the city’s Council for Planning and Architecture, the council had worked with relevant authorities to draft the criteria for evaluation and classification of villas in the city, but the final version of these criteria had not been reached.

Therefore, the official said, the villa in question as well as many others in the city had not been classified, making it difficult for local authorities to accept or reject construction requests from the owners. The official added that the draft being discussed also included policies to support owners whose villas fall into the first or second categories. In reality, owners of historically or culturally significant villas face many difficulties in affording their proper restoration, as workers must possess specialized knowledge in their conservation.

Chinese ships that have encroached on Vietnam’s waters to guard a Chinese oil rig illicitly operating there since early May have continued to attack the Vietnamese vessels that are attempting to convince them to leave the waters, two Tuoi Tre correspondents reported Sunday from the scene