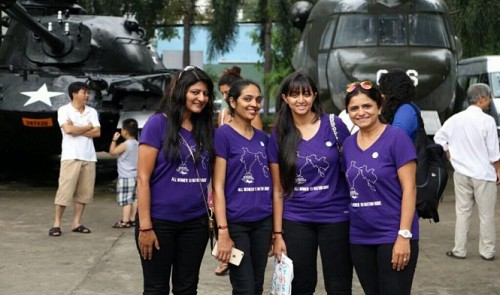 Four ‘Biking Queens’ are finishing up their 10-nation motorcycle expedition that sought to save, educate, and empower female children after passing through Vietnam earlier this month.

Their journey is supported by the Indian government and the WHO in the hope of spreading a message of female empowerment and education, particularly amongst children, according to the Consulate General of India.

“Many societies view girls as a burden, but they are not. We need to educate young women and teach them they are not a burden and can live on their own,” Dr. Sarika J. Mehta, a panelist for the American Psychological Association and founder of Biking Queens, told Tuoi Tre News during the group’s time in Ho Chi Minh City on July 2.

In each country they visited, the group met with local governments, NGOs, and women’s organizations to promote their campaign. They also donated materials to schools serving underprivileged children.

During their visit to Vietnam, they met with the Vietnam Women’s Association in Ho Chi Minh City and exchanged views on capacity building, welfare, and supportive measures for women, as well as female roles in families, societies, and economic development within India and Vietnam.

Mehta says the 10-nation ride is only the first phase of the project and plans have already begun for a second phase that will include return trips and longer stays in order for the group to participate in social development projects throughout each country.

The 'Biking Queens’ consistently met with shock while publicizing their ride.

Before their journey even started, the group was frightened by rumors of dangerous roads and lack of support in other countries, feelings the Queens soon found out to be completely misguided.

“We received a huge amount of support from people,” 'Biking Queens' shared, saying they had been supported by both Indian embassies and local people.

“There was a problem with our vehicles and we were stuck when we entered Vietnam,” Mehta recalled. “A man quickly came to help us and took us 40km away. His family also prepared veggie foods for us at his home. He was very nice!”

Despite crashes, being stuck in the forests, and rides through rain and fog, members of 'Biking Queens' excitedly called their experience a huge challenge that they were proud to have overcome and learn from.

Mehta said she started to ride bigger motorcycles about two years ago after seeing so many men in Indian on similar bikes.

“My friends said the bikes are fun but female riders would have trouble with such heavy vehicles,” she said. “I thought that there was nothing women couldn’t do, so I said, ‘Fine, let’s try it, why not?”

To prepare for their 40-day journey, Mehta said she had more than three months to choose three of the best 'Biking Queens' members in India – a difficult task.

“Every day we ride about 300-500km, so we have to have our mental and physical health well-prepared,” the group’s leader said.

“Throughout the ride, I wanted to give a message of passion to women and force them out of their comfort zone. If they can get out of their shell, they can do wonders in life,” Mehta added.

A major challenge for the group was the looming homesickness that was cast over them during the 40-day trip.

In India, leaving children and family is not a tradition and at times knowing their loved ones were so far away affected the group's morale.

“But it’s like breaking out of our own comfort zone and moving,” Mehta said.