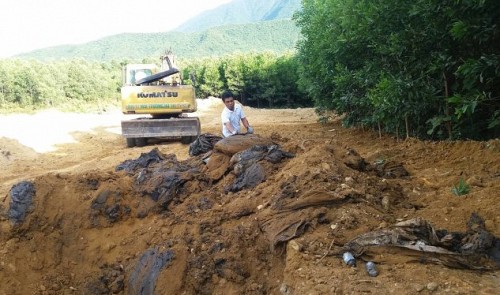 Vietnam’s police on Tuesday began looking into the secret burial of 100 metric tons of wastes at a farm in the north-central province of Ha Tinh by the local unit of Taiwan’s Formosa Plastics Group.

Nguyen Xuan Ly, head of the environmental police unit (C49) under the Ministry of Public Security, confirmed to Tuoi Tre (Youth) newspaper that the probe had been launched shortly after the detection of the underground wastes.

On Monday, the Formosa subsidiary in Ha Tinh, which operates a steel mill at the Vung Ang Economic Zone, was found burying a huge amount of waste at the farm run by Le Quang Hoa, director of an urban environment company in the town of Ky Anh.

The province’s environmental inspectors said some 100 metric tons of waste, later identified as having originated from the coking furnace of the Formosa steel plant, had been disposed of underground there.

The unearthed wastes had been re-buried to avoid polluting the environment, and C49 officials had already taken samples of them for hazard tests.

“We will strictly punish any wrongdoers once the test and investigation results are available,” the C49 head Ly told Tuoi Tre.

Hoa, the director of the Ky Anh environmental company, said on Tuesday the wastes were household materials from the Formosa plant and were not hazardous.

Le Nam Ha, 65, a local who rents the land in Ky Trinh Ward to raise cattle, told Tuoi Tre the same day he had seen trucks carrying the black wastes frequenting the property over the last few months.

“The farm owner told me he would grow grass for cattle feed over the waste,” Ha said.

Truong Cong Binh, an official of Ky Trinh Ward, said local authorities had not been informed of such a burial at Hoa’s farm.

“The property is located at the watershed of the neighborhood so the disposal there is worrisome for local residents,” Binh said.

The Ky Trinh administration has asked the company to clear the waste but no action had been taken yet, he added.

Asked to keep the waste

Hoa said his company has been contracted to transport and dump household and industrial waste for the Ha Tinh facility of Formosa since 2008.

The black waste buried at his farm was part of a separate contract inked in May this year.

Under the contract, the Ky Anh urban environmental firm would transport and treat ten metric tons of waste on a monthly basis, at a price of VND800,000 (US$36) per ton.

Asked why the waste amounted to 100 metric tons after only two months, Hoa said both sides agreed that the real amount of waste would be bigger than contracted if required.

Hoa reiterated that the waste was not hazardous.

“They are just coal mud, which has been certificated by the provincial environmental protection agency as non-toxic,” he said.

“We only signed the contract with Formosa after considering that safety certificate.”

Hoa also said disposing of the waste underground at his farm was not his idea.

“We used to bury them at a legal area in nearby Ky Tan Commune, but many people had asked us to give the waste to them in order to grow grass for their cattle,” Hoa explained.

Among those who wanted to keep the waste was Le Thanh Hai, his older brother.

Hoa revealed that he had in fact transferred the farm to his brother, and the waste burial at the property was therefore as per the request of the new owner.

The company director even cited the law to back his moves.

“According to the government’s decree on waste, coal mud is deemed reusable so we allowed local residents to take the waste for their own purposes,” he said.

Hoa said the company had stopped the waste dumping contract with Formosa, pending the result of the investigation, but he stressed that it is the Taiwanese company that will be held responsible should the wastes be found to be hazardous.

The Formosa steel plant in Ha Tinh last month admitted to dumping untreated wastewater into the ocean, leading to the mass fish deaths along four coastal Vietnamese provinces between April and May.