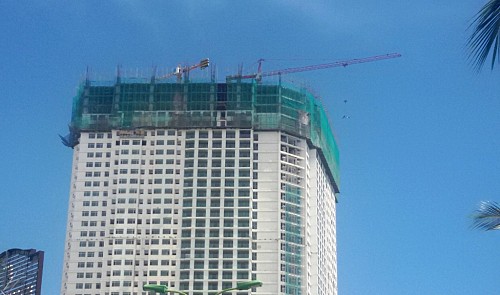 Construction of a mix-used building in the south-central Vietnamese province of Khanh Hoa is now underway despite local authorities’ suspension order following the developer’s violation of height limit.

Trucks were seen carrying materials to the construction site while cranes were operated non-stop to build the structure’s 43rd floor.

The provincial Department of Construction decided to terminate the building permit for the structure on Friday due to its violation of the law on construction.

Accordingly, the height of the building has exceeded the limit of 40 stories, the department stated, adding that a suspension order had been also issued the same day.

As construction was still in progress, competent agencies had imposed an administrative penalty on the developer, which is So 1 Dien Bien Construction Company.

According to inspectors at the Department of Construction, the Khanh Hoa Water Supply and Sewerage JSC has been ordered to cease its water supply to the building site.

The municipal People’s Committee has also been asked to assist in preventing workers and building materials from entering and being transported to the site.

Within 60 days since the suspension was announced, the developer is required to submit a new and legitimate building permit or the structure will be forced to be dismantled, with all expenses paid by the company.

However, no representatives from local authorities were seen at the site on Saturday to keep construction from being continued, the Tuoi Tre journalists reported from the scene.