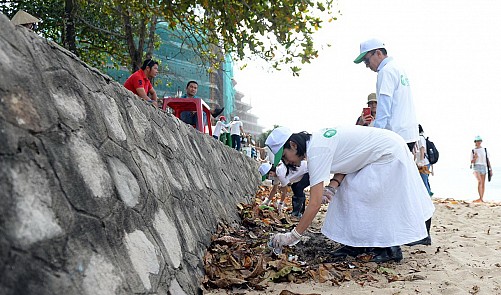 Many travelers on tours to Phu Quoc Island, off the southern Vietnamese coast, have jumped at a surprise offer from tour operators to take part in beach-cleaning activities as itinerary extras.

The activities are part of the ‘Phu Quoc Green Tourism’ campaign, jointly run by Tuoi Tre (Youth) newspaper and the administration of Kien Giang Province, which is located in southern Vietnam.

Phu Quoc, dubbed ‘pearl island’ for its breathtaking beaches and vast forests, is an offshore district administered by Kien Giang, and is Vietnam’s largest island.

Dozens of travelers on tours operated by Ho Chi Minh City-based Viet Media Travel and Phu Quoc-based Dong Doi Tourism on Friday enthusiastically joined in litter-picking activities at Dinh Cau Beach in Phu Quoc after they were given a surprise notice the day before by their tour guides.

Among the participants were Vietnamese actress Viet Trinh and Tran Thanh Trung, vice chairman at local movie studio VnFilm, who cut short their diving and fishing itineraries to partake in the activities.

“It’s a meaningful thing to do,” Viet Trinh told Tuoi Tre as she live-streamed the event on Facebook to raise awareness among her friends and followers.

“I feel that this needs to be shared, and I hope the message will be passed on by my friends and family members on Facebook,” the actress said.

As a tourist herself, Trinh said she understood how it felt to stand before a beautiful beach that had been turned ugly by litter.

“It’s disappointing to visit a place that is filled with litter,” Trinh said to explain her motive for joining the activity. “Just imagine how much more beautiful our travel destinations would be if we were more sensible and put our garbage away.”

Sharing the same experience, Trung said the beach-cleaning activities had become a memorable part of his trip to the island despite it being spontaneous.

“If you want your children to have beautiful beaches to visit in the future, join us now and spread the message that our future and that of our children’s start with how we treat today’s environment,” Trung underlined.

Trinh and Trung were joined by young volunteers from local Green Phu Quoc Club, which had been organizing similar monthly beach-cleaning drives.

After about 30 minutes, 200 meters of coastline at Dinh Cau Beach on the island were cleared of any sight of litter.

According to Nguyen Van Sau, deputy director of the Kien Giang Department of Tourism, Friday was the first time the ‘Phu Quoc Green Tourism’ campaign had called for participation from tour-goers in environmental protection efforts.

“This is a good start, as it proves that there are still many sensible tourists,” Sau said, adding that he had not expected the response from tourists to be so positive.

Sau called for other future visitors of the island to lend a helping hand to the local authority and people to conserve the island’s environment.

The 'Phu Quoc Green Tourism' campaign was kicked off in August and will run until the end of this year.

The campaign is intended to support a master plan by local authorities to turn Phu Quoc into “an international-level hub of ecotourism,” said Mai Van Huynh, deputy chairman of Kien Giang.