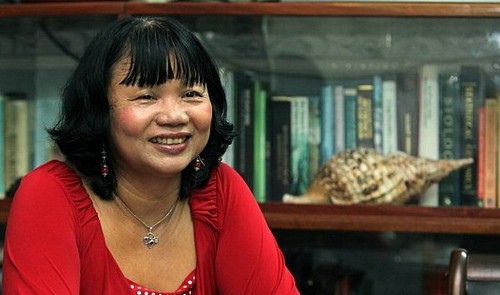 Five Vietnamese female scientists were honored under the L’Oreal – UNESCO For Women in Science program held in Hanoi on Tuesday in dedication to women scientists.

Two scientists have been awarded VND50 million (US$2,200) each for their findings in the fields of life and material sciences, while three others were granted VND150 million ($6,600) scholarships to pursue their research topics.

The five had been shortlisted from 23 candidates by an independent council comprised of leading scientists in their fields.

Prof. Dr. Nguyen Thi Lang, head of the Genetics and Plant Breeding Division from An Giang University, was honored for her research on high quality hybrid breeds of rice that could withstand salinization in the Mekong Delta region of Vietnam.

Lang’s research results have already been applied and yielded positive results in terms of rice production and commerce.

Meanwhile, Dr. Nguyen Thi Mua from the Fire and Rescue Department at the Ministry of Public Security was honored for her research on heat-resistant materials to be used in making firefighting suites.

Lang and Mua were awarded the L’Oreal – UNESCO For Women in Science Awards and VND50 million in prize money each.

Three young female Vietnamese research scientists were also granted the L’Oreal National Fellowship for Women in Science, which is awarded to female Ph.D. holders under 45, who are pursuing research in the fields of life and material sciences.

The three received grants of VND150 million each to pursue their respective research topics.

The For Women in Science Program was launched by L’Oreal Group and the United Nations Educational, Scientific and Cultural Organization (UNESCO) in 1998.

So far, it has supported more than 2,500 female scientists in 112 countries around the world.

The program made its debut in Vietnam in 2009, and has since granted fellowship scholarships to 18 young female Vietnamese scientists, as well as honoring five female scientists with major contributions to the advancement of Vietnam’s scientific community.