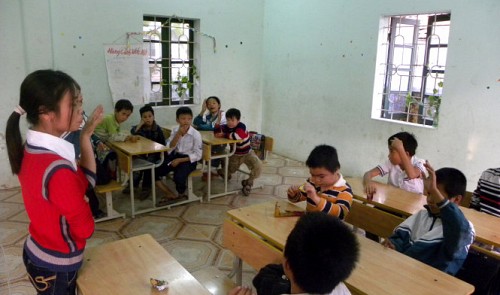 Meet the disabled teacher of mentally challenged children in Hanoi

A girl who overcame her walking abnormality with great perseverance is now passing on the spirit to her underprivileged students in a charity class in Hanoi.

That is the story of Nguyen Thi Giang, a full-time teacher in a charity class in Co Loa Commune, Dong Anh District.

Born in 1981, Giang suffered from polio when she was nine months old, a disease that has since left one of her legs paralyzed.

Shutting out her chronic pains and discouragements from her relatives, Giang pursued high school study by cycling to school on a daily basis despite her paralyzed leg.

There have been multiple occasions when Giang to fell and bled while riding her bicycle, but the persevering girl refused to let herself be disheartened by the injuries.

After graduating from the Hanoi College of Education, Giang taught at Co Loa Elementary School for a while before volunteering to teach the charity class upon its foundation.

Giang’s class is comprised mostly of students with mental or physical disabilities that cannot afford them special education elsewhere.

Every day, Giang cycles to class and stands on her own legs to teach lessons to the underprivileged children with great devotion and compassion.

The teacher said her own disability allowed her to sympathize well with her children and inspired her to be committed to the job each day.

“Teaching these kids means taking the roles of a teacher and a mother at the same time,” Giang said of the nature of her job.

Most of Giang’s 16 students are mentally challenged, with one behaving like a little child despite being 14 years old, and another having spent five years in first grade without moving on to second grade.

Refusing to let her ‘kids’ live the rest of their life in illiteracy, Giang takes it upon herself to do research on teaching children with special needs and invents more captivating ways to deliver knowledge to her students.

Giang would patiently teach one lesson over and over again until her students understand it, with occasional use of songs and games to keep the kids focused.

The 1.4-meter teacher said her most memorable experiences as a teacher were occasions when she randomly received flowers from her students without any special reasons.

“Though they were only wild flowers that the students had picked up on the way to school, I was always flattered by their kind action,” Giang said. “They were so innocent. They didn’t even know what to say when giving someone flowers, and I had to teach them every time they did.”