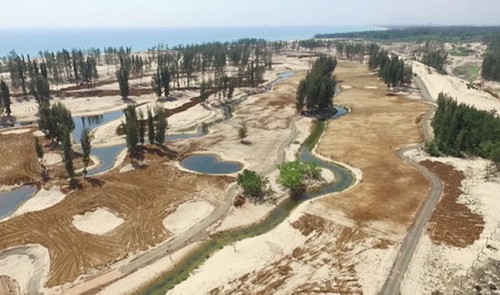 Over 140 hectares of protection forest in south-central Vietnam is being destroyed to make way for a golf course, hotel and resort complex without the premier’s approval.

Administrators in Phu Yen Province had given the project the green light and encouraged the quick clearance of protection forest, only to later admit that it had not submitted a plan to the prime minister for approval as required by law.

The developers of the luxury projects have paid a total of VND7.3 billion (US$325,000) as compensation for destroying the forest.

The trees formed a coastal forest that protected the city from sand and fierce winds coming from the sea.

One year later, as Tuoi Tre journalists revisited the area, what they captured was unsettling: the forest had disappeared, replaced with a golf course construction site bustling with workers and engineers.

At its entrance, a large billboard has been erected, announcing the golf course as part of a high-end tourist compound being developed by New City Vietnam Ltd.

According to materials available at the Phu Yen People’s Committee, the project covers 122 hectares and is among three areas approved by the administration to be turned into luxury resorts with capital investment close to $1 billion.

Throughout the vacant land that was once a lush pine forest, trunks of newly felled trees were still observable.

Bulldozers were operating at full capacity to build the golf course in time for a beauty pageant, slated to take place there in July.

The provincial administration has also approved New City’s request to hire 25 foreign experts, technicians and managers to work on the project until 2019.

On the neighboring piece of land opposite the golf course, an additional 20 hectares of forest has also been partially destroyed, ready to be transformed into a five-star luxury hotel and resort complex developed by local firm Sao Viet.

A cobblestone path has been paved from Le Duan Street out to the beach, decorated on each side with ornamental trees and artificial lakes.

Three hundred meters into the site, excavation works are underway for the construction of hotels, adjacent to massive logs scattered around the workers’ camps.

$2,300 for one hectare of protection forest

According to Nguyen Manh Thi, chairman of the An Phu Commune in Tuy Hoa City, where the work is taking place, the combined area of the projects being developed by New City and Sao Viet is over 140 hectares.

The protection forest that needs to be cleared to make way for the projects was first planted in 1979, before being re-planted for additional strength in 2000, using funds from the Japan International Cooperation Agency, Thi said.

“The Australian pine tree forest here is about 16-17 years old, and plays a crucial role in preventing wind and sand from the ocean from approaching Tuy Hoa City,” Thi explained.

On October 19, 2016, the People’s Committee of Phu Yen, in a letter signed by its deputy chairman Nguyen Chi Hien, agreed to let New City pay a compensation sum instead of having to re-plant the forest they would destroy for their project.

The suggestion was approved by the Phu Yen administration, despite the provincial Department of Natural Resources and Environment previously suggesting a much higher compensation rate: VND82 million ($3,600) per hectare.

In total, New City and Sao Viet have paid VND7.3 billion in compensation for clearing over 140 hectares of protection forest in order to go ahead with the construction of a golf course, luxury hotel and resort complex without future responsibility for the felled trees.

In order to speed up work on the projects, the administration of Phu Yen approved the clearance of the forest before New City and Sao Viet had even submitted the requisite papers for their construction.

On October 31, 2016, New City and the two other bodies involved were awarded a certificate of merit by the provincial administration, recognizing their “excellent accomplishments” in clearing the said land.

Phu Yen Urban Environment Company, which was in charge of uprooting the pine trees to be re-planted elsewhere, was only able to save 200 trees among the total cleared for the project, according to its marketing executive Tran Minh Hoang.

“Some trees were simply too large to be uprooted, and had to be axed into logs,” Hoang said.

Truong Tan Ho, CEO of the Cao Nguyen Lam Company, said his company had been tasked with uprooting over 2,000 trees in 35 hectares of forest.

However, Ho said only three to four out of ten uprooted trees survived in their new environment. He estimated that only around 500 of those trees were alive to this day.

The cost of uprooting the trees and re-planting them along Doc Lap Street in Tuy Hoa City was VND1.7 million ($76) each, paid for by New City and Sao Viet, according to the People’s Committee of Phu Yen.

Huynh Lu Tan, director of Phu Yen’s Department of Construction, confirmed to Tuoi Tre that the department had not to this day granted any construction permit to New City.

As in the case of Sao Viet’s project, the authority to issue the permit lies in the hands of the Tuy Hoa City administration, Tan added.

Tan said, however, that the golf course being constructed by New City did not necessarily require a separate construction permit, as it would be included in the permit to be granted later for the overall project developed by the company.

“Some construction items had been approved by the provincial administration to commence in advance in order to speed up progress,” Tan explained.

This stance by the Phu Yen administration is reflected in multiple documents and letters issued between June and October 2016.

According to current Vietnamese laws, approval from the prime minister is required for the conversion of land use on pieces of land that are 20 hectares or more in area.

However, as of today, the province has still been in the process of completing the necessary papers to submit to the premier, meaning the protection forest had been converted into business land without any approval from the head of government.

In an interview with Tuoi Tre last Thursday, Nguyen Nhu Thuc, deputy director of Phu Yen’s Department of Natural Resources and Environment, admitted that no decision or contract of land lease had been signed between New City and provincial authorities.

Environmental impact assessment reports for the project are also yet to be approved by the local authorities, Thuc said.