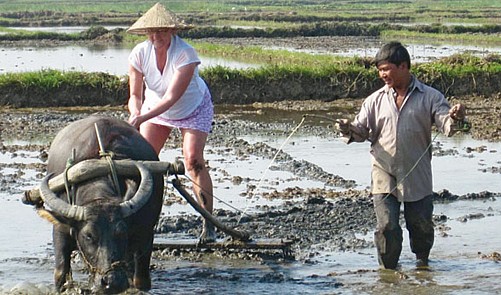 From a rudimentary farming practice, plowing paddy fields with water buffalo has become a unique and immersive tourist experiences for foreign visitors to the small town of Sa Pa in northern Vietnam.

Under a beating afternoon sun in the foggy mountains of Lao Cai Province, a group of foreign tourists sloshed through ankle-deep muddy water, excitedly shouting English commands to a water buffalo that seemed able to understand their every word.

The group was participating in the increasingly popular ‘be a farmer’ tour that provides foreigners with a first-hand glimpse into the lifestyle, culture, and farming practices of local residents in Sa Pa Town.

Australian tourist Tomy Akira was already drenched in sweat after a few rounds of plowing the paddy field.

Akira’s water buffalo seemed to understand the tourist’s English instructions, stopping and turning on each command without causing much trouble for the first-time farmer.

The group of ten tourists took it in turns to plow the field, while those not working with the buffalo spread out to till the land and level the field.

Cindy, 21, and Sofia, 23, both Canadian nationals and the youngest in the group, were tasked with collecting the grass left behind after plowing.

After more than two hours of their working in the muddy water, the nearly 500-square-meter field had been fully plowed and was finally ready to be sown.

The tourists then divided themselves into four smaller groups to manually ‘splash’ water into the field using a cylinder-shaped bamboo farming tool known as ‘gau’.

Akira, gasping for breath after finishing his farm work, said the experience had been more exhausting than working out.

He added, however, that the exhaustion was actually fun and gave him first-hand experience on what life is like as a farmer in Vietnam.

Watching the tourists from afar was Giang A Chua, an elder in Sa Pa’s Lao Chai Village, who said he was surprised by how good the foreigners were at farming.

“The buffalo can understand commands from any tourist,” said Vu Thi Man, owner of the buffalo and paddy field that the tourists had just worked. “It gets used to it because they speak English all the time.”

According to Man, her family has welcomed multiple groups of foreign tourists wishing to experience farming with a buffalo over the past five months.

The buffalo she uses with the tourists was specifically picked for its calm temperament in order to avoid any accidents with the visitors.

To ensure she is able to accommodate tourists at any time, her family had reserved a special piece of paddy field where no regular farming activities are done.

“We welcome groups of tourists every now and then. The income from hosting each group is much better than what we would get from growing crops,” said Man’s husband Giang A Pao. “There are three other families in our village who provide the same service. A group of around ten tourists can bring in more money than an entire field of rice or corn.”

In the neighboring village of Ta Van, locals have also been shifting their normal farming routines to accommodate similar services.

“Local farmers can earn VND2 million [US$88] from hosting 10-20 tourists,” said a tour guide who was familiar with such ‘be a farmer’ tours. “It is quite valuable compared to the average income in these mountainous areas.”

According to the tour guide, what captivates foreigners when they choose to participate in such experiential tours is the fact that they can dwell right into the local lifestyle of villagers in the northwestern region of Vietnam.

He added that most of the time these tourists only sign up for a tour package on their first time.

They tend to form their own groups and participate in an independent experience on their second time around.

“Therefore, locals who want to keep their business going must get professional while conserving their unique identity and culture,” he said.

According to Lao Cai’s Department of Culture, Sports and Tourism, never before has Sa Pa welcomed as many visitors as it does today, thanks to the natural and cultural beauty of the ethnic Hmong people.

Nearly 2.3 million tourists visited Sa Pa’s Mu Cang Chai District in 2016, close to half of whom were foreigners, the department reported.

“The province is focusing on diversifying tourism products to attract more tourists, especially foreign ones,” said Ha Van Thang, director of Lao Cai’s Department of Culture, Sports and Tourism. “We are placing particular emphasis on products that allow visitors to experience the lifestyle and identity of local ethnic minorities.”

“There have been growing numbers of international tourists coming to Sa Pa. We are creating a scheme to train locals to become better service providers and earn a more livable income.”