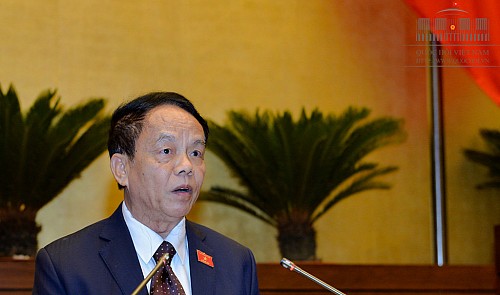 A number of provincial leaders in Vietnam have demanded protection from the country’s national guards following the brutal murder of their colleagues.

The request was brought up on Tuesday during a session of Vietnam’s lawmaking National Assembly (NA) to review a draft of the country’s upcoming Law on National Guards.

“After what happened in one province last year, many provincial leaders have requested that their Party chief and chairman be placed under protection of the national guard,” said Colonel General Vo Trong Viet, chairman of the National Assembly’s National Defense and Security Committee, while he took questions from NA members on the legislation.

Viet was apparently referring to an incident in August 2016, when a chief forest ranger shot and killed the Party chief and chairman of the northern province of Yen Bai before killing himself, as the officials gathered for the opening of a provincial People’s Council meeting.

The People’s Council is the local equivalent to the lawmaking National Assembly.

The gunman in Yen Bai was later found to have committed the crime because of his dissatisfaction with job appointments by the provincial leaders that had resulted in him losing his high-ranking position.

In March, the chairman of northern Quang Ninh Province received threats after he launched a campaign to end harmful sand exploitation in a local river.

However, according to Viet, the request to expand protected objects of the national guard to include provincial leaders had been rejected by the NA’s Standing Committee.

Currently, the Law on National Guards only allows top government leaders protection, including the State President, Prime Minister, Chairperson of the National Assembly, and the General Secretary of the Communist Party of Vietnam.

Those who have retired from these positions, as well as sitting deputies, are also entitled to the same protection.

Vietnam’s national guard is also tasked with protecting important foreign delegations, locations at high risk of attack, and during landmark political events in the country.

According to Vo Trong Viet, some NA members had asked to include the Chief Justice of the Supreme People’s Court of Vietnam as a protected object, but this was also rejected.

“If we include the Chief Justice, then we will also have to include the State Auditor-General, as whoever holds that position must tackle extremely sensitive issues centering on anti-corruption,” Viet explained.

The colonel general stressed that there should be a distinction between bodyguards and national guards, as the two are very different in terms of national importance.

“The current law has been drafted based on the real-life practice of national guards and is appropriate for the current condition of our country,” Viet said.

Meanwhile, public reaction to the request has been fairly unanimous, mostly condemning it as a waste of the state’s budget and simply unnecessary.

“You just need to do your job as best you can, and the millions of  Vietnamese people will be your national guards,” one Tuoi Tre (Youth) newspaper reader responded to the report.