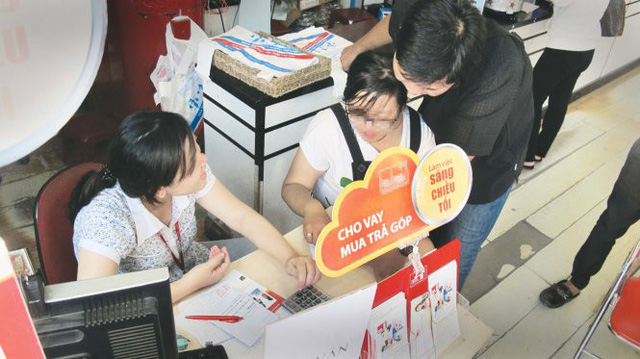 The consumer finance market has proven lucrative in Ho Chi Minh City, even when interest rates could be as high as 45 percent a year

Many people in the southern Vietnamese metropolis now tend to turn to consumer finance companies, instead of friends or family, when they need money to buy things, particularly electronics.

A consumer finance firm is a non-bank lender, which does not receive deposits but does make loans to customers for personal use.

In the year to date, consumer loans in Ho Chi Minh City have topped VND244 trillion (US$10.75 billion), accounting for 12.2 percent of the total outstanding loans, according to Nguyen Hoang Minh, deputy head of the Ho Chi Minh City branch of the State Bank of Vietnam, which is the country’s central bank.

This illustrates robust consumer credit growth, considering that the proportion in 2012 was only four percent.

The current outstanding consumer loans in Ho Chi Minh City were three times higher than the VND80 trillion ($3.52 billion) level recorded in 2015, according to the central bank.

“The consumer credit trend has contributed to the city’s credit growth and a revenue rise for banks and consumer finance companies,” he added.

Vietnam’s consumer finance market was valued at around $26 billion in 2016, making up nearly 10 percent of the country’s GDP, according to a report released in mid-2017 by the Viet Capital Securities.

This means with a $100 loan, a bank can rake in a net profit of $2.9, whereas a consumer finance firm can make $20, thanks to much higher interest.

The high net interest margin, plus borrowers’ warm reception, has made consumer finance a lucrative market.

These companies are racing to cooperate with retailers to reach customers faster and easier.

At motorbike outlets, mobile phone or electronics stores across the city, it is easy to find agents of at least one of these four companies ready to lend consumers up to 100 percent of a product’s value.

Low- and average-income earners who want quick money, without having to complete bank procedures or putting up collateral, to buy things are target customers of consumer finance companies.

Loans can even be approved online and within 24 hours, whereas it usually takes banks a few days to disburse the same lending.

Borrowers do not need any collateral and are only required to prove they are capable of repaying the loans. According to industry insiders, up to 80 percent of loan applications through consumer finance companies are approved, compared to 50-60 percent in the case of banks.

To make up for the risks of the non-collateral loans, consumer finance companies usually charge high interest rates for their lending, sometimes up to 45 percent a year.

But consumers are willing to accept the inflated interest rates to access quick loans.

In the meantime, Home Credit boasted a loan growth rate of 94 percent in 2016, with 4.9 million customers as of the end of last year.

HD Saison has contributed greatly to the revenue of its parent, HDBank.