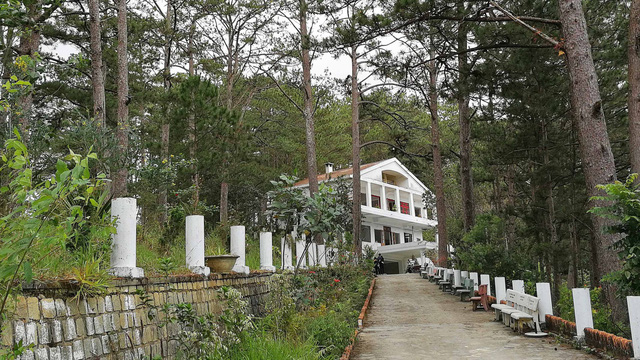 A forgotten property tucked away at the entrance to Da Lat continues to intrigue and petrify local residents and tourists alike.

Da Lat is an alluring resort town at the heart of Lam Dong Province in Vietnam’s Central Highlands.

As visitors approach the town they leave Prenn Pass behind and enter Da Lat, where they are typically drawn to a large, desolate villa.

The residence has long been known as a ‘ghost house’.

The façade faces the road and leans against a pine tree forest.

Spine-tingling ghost stories have been attached to the property, arousing the curiosity of visitors.

Da Lat boasts hundreds of centuries-old French and American-style villas, lending a distinctive hue to the serene town and making a lasting impression on visitors.

Over time, many have become run down and overgrown, and therefore a breeding ground for fabricated ghost stories.

Several other mansions on streets including Tran Hung Dao, Xo Viet Nghe Tinh and along Prenn Pass have also been dubbed ‘haunted houses’.

Among them, the Prenn Pass is the most high-profile.

Rumors circulated that during French colonial rule, a group of soldiers from the French Foreign Legion, a branch of the French Army, were stationed at the villa to ensure safety along Prenn Pass.

However, they raped and killed a number of girls who were in the wrong place at the wrong time before dumping their bodies.

Their spirits are said to remain in the house and howl incessantly at night.

Tuoi Tre (Youth) newspaper reporters and several militiamen spent a night at the residence for a taste of its eerie atmosphere.

The group arrived at dusk and left in the wee hours the following morning.

Several tossed and turned all night during the year-end cold and the wails they heard sent chills down their spines.

The stale, musty odor of the long deserted house also managed to play tricks on the group’s minds.

They lit candles and burned joss sticks to drown out other smells, which in fact only added to the spookiness.

On the second floor, which was the warmest and less draughty, was a worn-out sedge mat and a blanket riddled with holes along with empty beer and wine bottles.

The trash puzzled everyone as the militiamen had previously asserted that the abandoned home was devoid of human activity.

The 10 members huddled together in a circle, with flashlights and candles at the center.

Around 3:00 in the morning, a rustle was heard at the entrance, followed by the shadow of a person with long hair.

The experience left them all frozen with fear.

To their relief later, the shadow turned out to be that of a haggard-looking drunk, who tottered up to the second floor.

Less than 10 minutes later, his snores could be heard loud and clear.

The man was later revealed to be a vagrant who normally took shelter beneath the stairs at Da Lat Market, in the downtown area.

He had ventured into the haunted house to avoid a recent cold spell.

Veteran Da Lat photographer MPK, otherwise known as Phuoc ‘crazy’, revealed that he would frolic about the house during his childhood.

Several factors had contributed to the fabrication of ghost stories, he explained.

“One is its location at one end of the [Prenn] Pass. Second, several suicides and murders have occurred in the pine tree forest close to the villa. Third, a number of ghost films were filmed at the residence,” MPK elaborated.

He himself has led more than 10 film crews at the house to film ghostly scenes.

According to Chu Dinh Quy, the former chairman of the province’s Lam Ha District People’s Committee, the house belonged to an opulent Chinese Vietnamese man under the name of Les adrets (A sunny mountain slope).

In 1955, Vietnamese author Nhat Linh (1906-1963), whose real name is Nguyen Tuong Tam, purchased the house, where he would spend time writing and admiring the property’s stunning orchids.

Linh also bought another plot of land in Da Me (part of Duc Trong District today) to grow orchids before confirming that he would stay clear of political activity.

Linh had earlier been an active member at revolutionary political organizations, a National Assembly delegate in its first tenure and was later named Minister of Foreign Affairs of the Democratic Republic of Vietnam, which was founded in 1945.

He was sent by the incumbent government to lead a Vietnamese delegation to a historic conference held in Da Lat in preparation for negotiations with the French in March 1946.

Duong Hai Long revealed during his term as the chairman of Ward 3 People’s Committee in Da Lat City that two small graves kept cropping up from time to time on the premises of the haunted house, adding to the rumors.

However, the graves were actually established by superstitious visitors to pray for good luck.

Despite being well aware of this, Long and his staff burned joss sticks and earnestly sought permission to pull down the fake tombs.