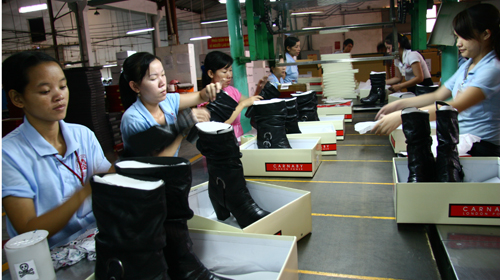 Vietnam exported US$750 million worth of footwear products in May, bringing the commodity’s export turnovers in the first five months of the year to more than $3.1 billion.

Export turnovers rose 11.4 percent compared to the same period last year, according to the Vietnam Leather and Footwear Association (Lefaso).

Footwear manufacturers have stable orders, and are signing contracts with new importers, the association said.

The footwear sector will greatly benefit from the Trans-Pacific Partnership (TPP) negotiations, as there will be more chances for local exporters to penetrate new large markets with a zero duty, instead of the current 14.3 percent, according to Lefaso.

“This will increase their competitiveness over other exporters who are not members of the TPP,” it said.

In related news, SYM Vietnam said it exported 30,000 motorbikes to the Southeast Asian market in 2012, nearly double the figure from 2011.

SYM has been shipping some 3,000 motorbikes a month to Malaysia, the Philippines, Singapore, Indonesia, Myanmar, Laos, and Cambodia over the past several years, SYM Vietnam CEO Wang Ching Tung said.

Several of the company’s products, including the Attila, Elizabeth, Joyride, and Passing scooters, have reached high localization rates of at least 95 percent, Wang said.