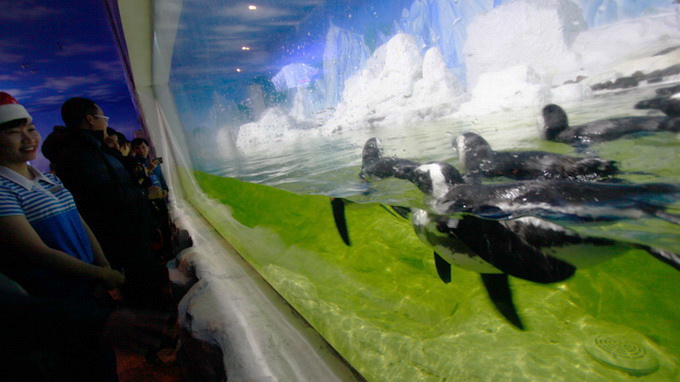 The 4,000m2 aquarium is one of the highlights of the 200,000 m2 complex, which is located at 458 Minh Khai, Hai Ba Trung district. The complex is the second of Vingroup’s underground mall chain.

More than 30,000 creatures from around the world, including rare ones, now call the place home. The new aquarium also boasts several species which are seen in Vietnam for the first time, including penguins, huge Spider Crabs and Moon Jellyfish (Aurelia aurita).

The penguins, imported from the Antarctic, have their own oasis on which their living area and conditions are identical to their native habitat. Specially-designed manmade nests allow the seabirds to mate and breed easily.

With its 3-million-litre capacity, the Vincom Times City aquarium has become the country’s largest aquarium, with the previous record held by the Vinpearl Land aquarium in Nha Trang in central Khanh Hoa province. The new aquatic zoo is also the first in the country to boast an underground tunnel.

As for the Vincom Mega Mall Times City, it boasts more than 300 stalls offering a wide variety of luxury products, the 11,000m2 Ocean Mart and the 15,000m2 cuisine section.

Another highlight is the 5,400m2 Platinum Cineplex, the country’s largest cinema, which has 11 screening halls and 2,100 seats.

A plaza with a stage spanning the 400m manmade river promises sparkling music and light performances.