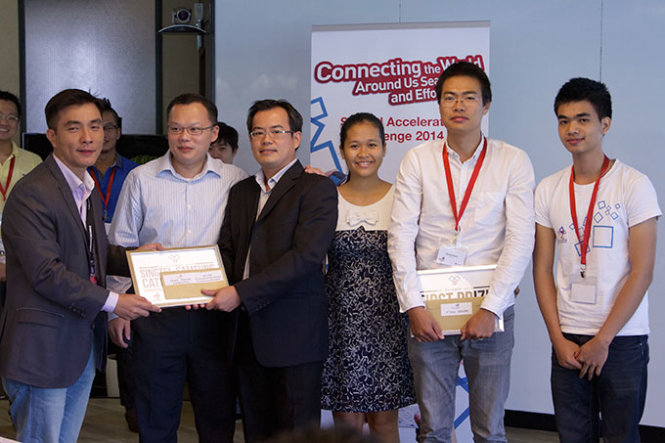 A young Vietnamese engineer, along with his Vietnamese and Singaporean partners, won two first prizes at Singtel Accelerator Challenge 2014 last month for their innovative app which provides users with hassle-free trip planning on the web and mobile platform.

The app, called Fiuzu, is available at fiuzu.com. It is the result of the hard work of 32-year-old Huynh Phung Huynh and his team.

The program, which can run on both computers and mobile devices, is designed to offer packages of handy, helpful tips on how users should plan their trips.

Several years ago Huynh found the daunting, time-consuming task of planning trips, including modes of transport, places of interest and food, a major deterrent.

After learning that many others face similar difficulties, he became determined to seek a solution.

In April, 2013, with his hands full with his job at the Institute of High Performance Computing, a research institute under the Agency for Science, Technology and Research (A*STAR)- Singapore’s largest research institute - Huynh decided to embark a quest to find a solution.

“We faced numerous difficulties at the beginning. Our 12 members include both Vietnamese people and foreigners, who either work in Vietnam or Singapore.  This presented us with a major challenge,” Huynh shared.

Most members joined Huynh’s project as freelancers, who shared a dream of producing a useful app for the community.

Several didn’t get paid and even spent their own money on the project when necessary.

“Despite our efforts and zeal, we returned empty-handed from several technology competitions in Vietnam and Singapore. I thus dreamed of landing in third place at the SingTel Accelerator Challenge 2014’s finale on October 20, 2014, which would considerably boost our members’ morale,” shared Huynh Tung, a co-founder of Fiuzu.

Beyond their wildest dreams, the app beat many strong contenders to win the competition, and also brought home prizes from SingTel- Singapore's biggest carrier - and Samsung.

Fiuzu will also be Singapore’s sole representative at SingTel and Samsung’s competitions, to be held later this month, within the region.

Meanwhile, a SingTel spokesperson told Tuoi Tre that Fiuzu is a hugely promising product, which is well-developed and caters well to the demands of regional users.

Registered users only need to enter their basic information on fiuzu.com, including destinations, tour duration and planned budgets and hobbies.

Fiuzu will then come up with a slew of suggestion packages, which offer details prices, routes and comments from experts and peer travelers.

Users can save the packages and make their own modifications.

Fiuzu currently offers information on 33 cities in Asia and Australia.

The app is expected to launch on the Apple Store this month and on Samsung Galaxy Apps and Google Store in December.

Huynh added that users can download the app for free on their Android and iOS-equipped smartphones.

“We’ve cherished hopes that in the near future all independent travellers will need to do is book their air tickets and just go. Fiuzu will help them with all the planning and spot selection and become their best companion during the trip,” Huynh shared.

However, the engineer also acknowledged the program’s current shortcomings.

The app is currently only in English, as Huynh’s group aims to launch it on the international market.

Huynh added that they will include Vietnamese on the app in the future.

They are also working to improve their database while looking for investment funds to provide his group with stable income.

At 27, he earned a doctoral degree from the prestigious National University of Singapore (NUS) and won several prestigious scholarships.

More than 20 of his specialized reports have been recognized at international seminars.

However, Huynh modestly shared that he wouldn’t have gotten anywhere without his teammates.

He has been working at Singapore’s Institute of High Performance Computing (IHPC) for the past five years, where he gets the opportunity to turn the projects of his dreams into reality.