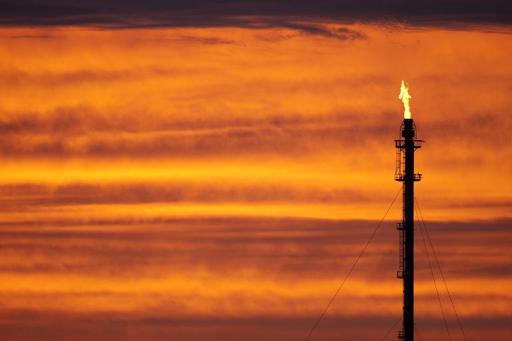 Global appetite for oil will grow at a slower pace in 2015 than earlier thought despite plunging prices, the International Energy Agency said Friday, warning of the risk of social instability in oil-producing countries such as Russia and Venezuela.

Oil demand for 2015 is now expected to grow by 0.9 million barrels a day to reach 93.3 million barrels, 230,000 barrels less than the previous forecast, the International Energy Agency said in its fourth downward revision in five months.

Crude prices have collapsed by almost 50 percent since June, and are now trading around $60 -- levels last seen five years ago, as increased US shale production adds to oversupply.

But the cheap oil is not expected to prompt more consumption.

"It may well take some time for supply and demand to respond to the price rout," the IEA said.

Market share lost to renewable energy sources was unlikely to be replaced again by cheaper crude, the IEA said.

In the OECD (Organisation for Economic Co-operation and Development) rich countries, "a tepid economic recovery, weak wage growth and ... deflationary pressures will further blunt the stimulus of lower prices," it added.

Any boost that cheaper crude could give to oil-importing economies would be outweighed -- if not more than outweighed -- by the damage done to oil producers.

In focus is Russia, which relies on its energy exports for half of its revenues. Its economy has been hammered by the double whammy of sliding oil revenues and Western sanctions.

The IEA said it was making the biggest cut to Russian demand, now expecting it to drop to 3.4 million barrels a day, 195,000 barrels below last month's estimate.

"In particularly cash-strapped economies, such as Venezuela and Russia, this impact is likely to be magnified as the risk of default escalates," said the IEA.

"The resulting downward price pressure would raise the risk of social instability or financial difficulties if producers found it difficult to pay back debt," it added.

Russia has said that it is losing up to $100 billion a year due to weak crude prices. But that was in November, when trading was at around $80.

On Friday, the US benchmark West Texas Intermediate (WTI) for January delivery was trading well under the psychological $60 barrier -- at $58.80. Brent crude had dived to $62.75.

The plunge in oil prices is sparked in part by a fundamental shift in the energy market.

Countries are turning to more energy efficient or renewable sources while new technologies have led to a shale boom, particularly in the United States.

While oil cartel OPEC has in the past acted against low prices by cutting output, this time round, the group is sitting firmly against reducing supplies.

Rather, it is in an all-out price war against US shale energy, in a battle to hold on to its market share.

Casualties are piling up -- including OPEC members themselves.

Venezuela has been forced to slash its budget, making sweeping salary cuts in civil servants' pay.

Even rich Nordic nation Norway was not spared, with its central bank on Thursday announcing a surprise rate cut in a pre-emptive move to counteract the impact of plunging oil prices.

Russia's ruble on Friday slumped to fresh lows, as the central bank's actions to halt the haemorrhage -- through an interest rate hike and heavy selling of foreign currencies -- proved futile.

Industry players too have been forced to restructure and cut jobs, with petroleum giant BP Wednesday announcing an overhaul costing $1 billion.