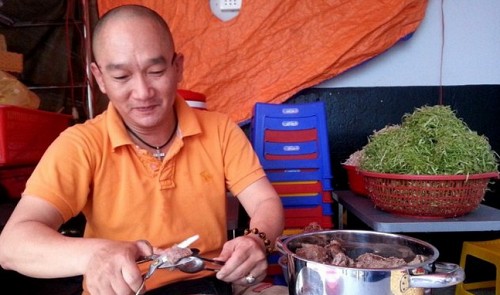 What can be learnt in marketing from Vietnamese small-sized, household businesses?

Simple but efficient marketing campaigns, with minimal costs, are what Vietnamese small-sized companies and household businesses often use to burnish the image of their brands.

While the public have fed up with clothes-shedding or breast-flaunting images showed off by those working in Vietnamese showbiz for the past years, any new kind of such things may not successfully draw attention for instant fame as intended.

But how about using cartoons to describe exactly what showbiz celebrities did years ago?

A small firm tried it in a recruitment advertisement last week, and the cartoon-style ad really caught public attention – what the company really wanted – at a cost of no more than VND1 million, too cheap for any sort of advertising.

Healthy Vietnam Life Co. Ltd., which sells matcha, or fine powder green tea, said in the ad that the firm is seeking for female employees, whose breasts measure more than 100cm and have not been altered by plastic surgery, to demonstrate how to get 100ml of breast milk for its next campaign.

A part of the cartoon-style recruitment advertisement using the slang word "pomelo" to refer to women's breasts of Healthy Vietnam Life Co. Ltd.

They will have to work four days a week and two hours per day, the ad said.

“If you meet all criteria, contact us to grab the chance to receive VND100 million only with 100ml of your milk,” the ad reads.

Application is open from April 1 to May 1, according to the ad.

As Vietnamese media flock to the firm for interviews after it released the job recruitment, the small company’s cost-effective marketing campaign has achieved its target.

If one wants to learn more about how to stay cheaper in mounting such a campaign, refer to what the ‘coolest noodle stall’ in Ho Chi Minh City has done recently.

Nguyen Hoang Anh Dung, the owner of the noodle stall, immediately won the hearts of local customers and the ‘coolest noodle stall’ title for his bun bo stall with a set of hilariously written rules.

Dung sells bun bo, or Vietnamese noodle soup with beef, at his stall known as “Bun Bo Gan” (noodle soup with beef tendon), as the dish mainly features that part of the cow, along the sidewalk near a condominium in District 4 and he put up a banner with a set of rules on the wall nearby.

The banner, aimed at making anyone who happened to read them could not help but laugh aloud, includes some rules like “We only accept banknotes with face value of VND500,000 at most. No foreign currencies are accepted.”

The first rule is, “Do not be talkative and criticize the store owner on the Internet,” then comes, “This is not Hue-style bun bo. You are not allowed to complain even if it tastes awful. You are required to empty the bowl. You have to pay even though you cannot eat it.”

“When you cannot pay immediately, please leave your home ownership or marriage certificates as collateral. In brief, any kind of paper is accepted, except for the toilet one,” reads the third line.

“If you have read all the rules and your bowl is now freezing cold, we are not to blame for that. Thanh kiu [Thank you],” the fifth rule goes.

The “Bun Bo Gan” stall has become famous since pictures capturing its funny rules surfaced on the Internet last week.

More significantly, Dung said he did it alone without any support from professional marketing agencies.

Old tactics, in new forms, supported by the Internet

According to a senior marketing specialist, the public relations tactic employed by Dung is viral or word of mouth marketing, which businesses, especially small-sized firms, should learn to apply.

It is hard for small-scale businesses to cover publicity and communication costs now as they are soaring, the specialist said.

Consumers have had enough of normal ads via conventional channels like newspapers and TV, he said, adding that even spending a lot of money on advertising is unlikely to be effective without a certain creative message.

Facebook and YouTube have created huge opportunities for enterprises, regardless of their scale, to advertise their brands at very low costs, or even free of charge, he said.

Chances are for everyone so the question is who creates the unique ideas to make people curious, become interested, and then voluntarily share what businesses want.

Tran Bao Minh, general director of IDP International Dairy Joint Stock Co., said that what Dung did might not capture public attention several years ago, when the Internet and media did not really have much impact on social life.

That the local government jumped in and seized Dung’s sign for several days, explaining it was offensive and caused traffic congestion, as it lured people there to see it directly, turned out to fan the public’s curiosity fire.

But it is still a happy-ending story, as officials had to return the sign to Dung amid pressure from both social and conventional media, Minh said.