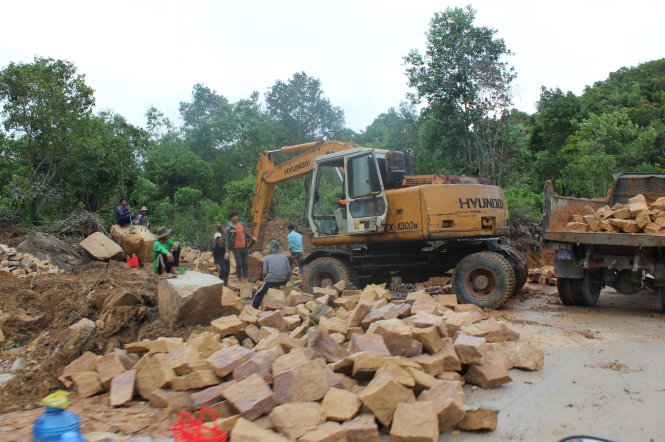 Those who illegally occupy forestlands on Phu Quoc Island, off southern Vietnam, and sell them to investors and speculators need nothing more than a simple agreement to complete transactions.

With the pieces of land illicitly claimed, the so-called land owners do not have any valid papers for the property, but buyers are still willing to open their pockets, as the island is witnessing what is considered the strongest “land fever” in a decade.

Phu Quoc, a district administered by Kien Giang Province, is expected to be covered by 7,038 hectares of protected forests – those intended to protect water sources and land and prevent erosion and desertification – by 2030.

The blatant deforestation is caused by a number of people from the mainland, who grow other trees on the cleared pieces of land to turn forestlands into ‘gardens,' and put them up for sale.

Waves of investors are coming to Phu Quoc to grab land for speculation, and they are willing to buy even those without valid papers, nourishing the illegal business of the illicit forestland claimants.

Transactions are made in cash, which the buyers carry in backpacks, and are guaranteed only by a written note between the sellers and buyers, rather than documents notarized by regulatory agencies.

Local authorities acknowledge that forestlands are being illegally occupied and traded, but it is “impossible to keep a record of these illegal actions,” Duong Minh Tam, head of the island’s forest management board, admitted.

The management board has booked ten cases, in which six hectares of forestlands were illegally claimed, in the year to date, Tam told Tuoi Tre (Youth) newspaper.

“The illegal occupation of forestland has been rising sharply in the first half of this year,” he added.

Local authorities have relocated some 8,000 trees of all kinds which the illegal claimants have grown on the cleared forestlands, Tam said, adding that it is a tough task to completely crack down on the illegal activity.

“Our force consists of 13 members so it is impossible to oversee the entire island,” he admitted.

The illegal forestland claimants, however, are not anonymous.

“We are watching a group of more 30 people who come from the mainland to illicitly occupy forestlands and land plots zoned for resort projects here,” Le Quang Minh, head of the Phu Quoc natural resources and environment bureau, said.

The official added that these people are “guarded by gangs.”

“The zoned land plots that are illegally occupied are those left abandoned by sluggish resort developers,” he said.

Phu Quoc has been planned for an exclusive economic zone by 2020 in a proposal approved by Vietnamese Prime Minister Nguyen Tan Dung.

The government has created exclusive mechanisms for Phu Quoc, and the island is also enjoying the highest-ever preferential treatments to have its traffic, infrastructure and energy systems developed up to its potential.

The island, now a popular destination for retreats with its white-sand beaches and high-quality seafood, is thus attracting increasing investment from resort and realty developers and many other investors as it transforms from a resort island into an economic hub.

It is planned that Phu Quoc will have 3,861 hectares of land zoned for tourism purposes. But the ‘land mania’ and widespread illegal deforestation on Phu Quoc are likely to violate the planning.

As many as 9,840 hectares of land on the island have so far been zoned for tourism development, according to the management board that oversees investment activities there.

Still, Huynh Quang Hung, deputy chairman of Phu Quoc District, is upbeat that there will be no breach of the zoning.

“Those who buy land during this land fever still have to seek permission from authorities if they want to change the usage purpose of their property,” Hung said.

“So it’s not likely that the planning of the island will be violated.”