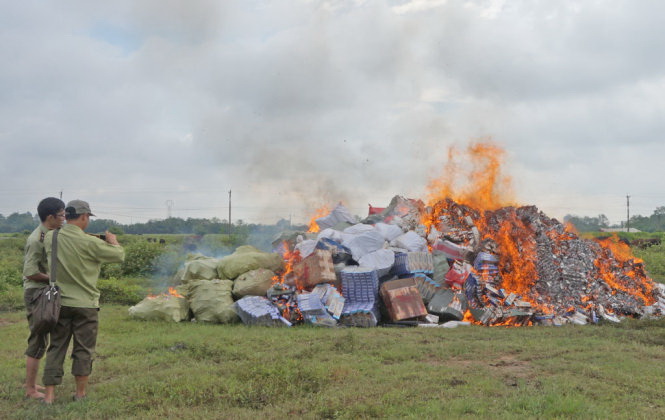 The tug-of-war between tobacco smugglers and anti-smuggling forces in border localities in Vietnam remains tough despite local authorities’ ceaseless efforts. While cigarette smuggling remains rife in provinces bordering Cambodia to the detriment of the state budget as well as people’s health, local cigarette producers are concerned that contraband tobacco may get officially circulated in a controversial move proposed by the government. Despite heavier traffic in Chau Doc City in the Mekong Delta of An Giang as the locality has entered its peak tourism season, tobacco smugglers are often spotted carrying their illicit goods and driving their motorcycles with no license plates at high speed on several streets. They typically speed off in small groups every 10 minutes. The 389 National Steering Committee, tasked with combating smuggling, commercial fraud and counterfeiting, disclosed the opposite periphery is currently home to 26 warehouses storing contraband tobacco which can be sneaked into Vietnam any time. Anti-smuggling forces are well aware of their unlawful operations, but have faced immense difficulty in their efforts to break up these rackets. Many traffickers have remained elusive thanks to sophisticated tricks to carry and hide their products, including storing them at smugglers’ houses and other locations, as well as constantly changing their means of transport and ‘workplaces.’ With eyes and ears everywhere, these men are always on high alert and swiftly flee the areas or even leave their wares behind if detected. An increasing volume of cigarettes is also being smuggled into Long An Province, approximately 50 kilometers from Ho Chi Minh City, from Cambodia. They have made a comeback after intensive campaigns to curb trafficking have subsided. Smugglers are mostly spotted sneaking goods along Provincial Highways 8 and 9 from Loc Giang Commune, Duc Hoa District and My Quy Tay Commune in Duc Hue District on their way to Ho Chi Minh City.Conflicting laws Amidst the heat, laws regarding efforts to curb and battle smuggled tobacco remain contradictory. In an official dispatch submitted to the Government Office in September 2016, the Ministry of Justice pointed to classifying illegally imported cigarettes as contraband or goods allowed to be traded on certain conditions as one of the difficulties. The legal basis for criminal penalties also remains incoherent regarding whether smugglers will be prosecuted if they deal in 500 packs or 1,500 packs of cigarettes. The 2015 Criminal Code also changed the legal basis from the amount (over 1,500 packs) to the contraband’s monetary value (more than VND100 million (US$4,353)), which is equivalent to more than 6,000 packs. This has rendered criminal penalization virtually impossible, as there are no legal grounds to evaluate contraband cigarettes. The incoherence has left nearly 70 smuggling cases with more than 500 packs of cigarettes seized by policemen in An Giang within the first three months of 2017 insolvable.  Relevant agencies in Can Tho City and Long An Province are still struggling to handle dozens of such cases. Meanwhile, the Government Office has just sent an official dispatch to the Ministry of Finance, the Ministry of Industry and Trade and the People’s Committees in Long An and An Giang to notify them of Prime Minister Nguyen Xuan Phuc’s stance on a proposition to re-export seized tobacco. Contraband will be destroyed if found to be counterfeit items. Higher-quality illicit cigarettes, meanwhile, will be up for auction for domestic consumption or re-export through international border gates on a pilot basis. Concurring with the opinion, Nguyen Xuan Hong, deputy director of the Long An Department of Industry and Trade, said annihilating contraband inadvertently helps consume foreign producers’ cigarettes more quickly. Re-export will earn the local sector an average of VND6,000 ($0.3) a pack, which will support anti-smuggling efforts, he argued. By contrast, Saigon Industry Corp. and Khanh Viet Corp., based in the south-central province of Khanh Hoa, have voiced their objections to this proposition. Representatives of these companies raised questions regarding how to assess the quality of illegally transported tobacco. JET and HERO products, which account for approximately 80 percent of the contraband cigarette market in Vietnam, are mostly turned away in other countries, which means a higher possibility for the shipments to return to Vietnam. They also call for different taxes, including special consumption and value-added duties, to be scrapped on local products to ensure fair competition with their smuggled counterparts. Likewise, representatives of the Vietnam Tobacco Association maintained that the proposition would contradict current rules, including the Law on Prevention and Control of Tobacco Harms, which stipulates stringent technical criteria that local producers have strictly conformed to, but are overlooked by contraband makers. Many illicit products breach a number of regulations on tobacco management stipulated by Vietnamese law, the association said. Many brands, such as JET and HERO, are sold without any picture health warning, place and year of manufacture, and expiration date. The toxicity of these products, which contain forbidden substances such as coumarin and cadimi, is also far higher than the rates allowed by the Vietnamese Ministry of Health, according to reports by the Criminal Science Institute under the Ministry of Public Security and the Tobacco Institute. Local experts pointed out that the World Health Organization Framework Convention on Tobacco Control (WHO FCTC), of which Vietnam is a member, stipulates that all seized, smuggled or counterfeit cigarettes and production equipment be destroyed. “Without outlets in other countries, there are good chances that re-exported contraband cigarettes will penetrate the domestic market once again,” a pundit from the Ministry of Industry and Trade warned.