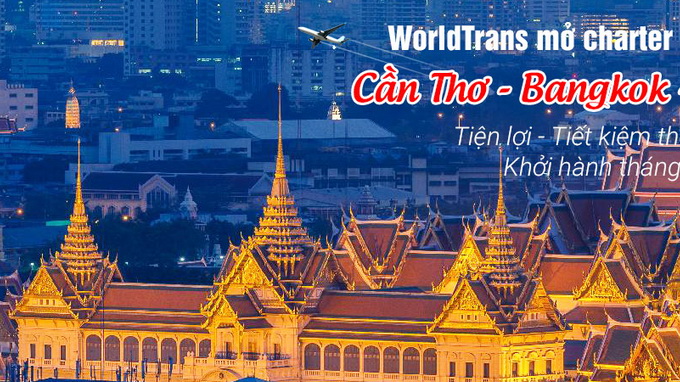 New Can Tho - Bangkok charter service to launch in late June

A Vietnamese company is slated to launch a new charter service connecting the Mekong Delta city of Can Tho with Bangkok later this month.

WorldTrans Travel and Transport Services will open ten direct flights from the southern Vietnamese city to the Thai capital between June 27 and August 2, the company told reporters at a press conference on Friday.

The charter service is aimed to meet travel demand of people, particularly students, not only in Can Tho but the entire Mekong Delta region, to Thailand during this summer, according to WorldTrans general director Tran Tuong Huy.

Last year some 900,000 Vietnamese tourists visited Thailand and the figure is expected to rise to 1 million this year, 60 percent of which are those from Ho Chi Minh City and the Mekong Delta, Huy said.

Huy speaks at the conference

Passengers in Can Tho usually have to travel to Ho Chi Minh City by car to board their flights to Thailand.

“The upcoming direct flight from Can Tho will help passengers save up four hours of that journey, as the Can Tho - Bangkok fare is nearly the same as that of the Ho Chi Minh City-Bangkok service,” Huy added.

The 90-minute flight between Can Tho and Bangkok will be launched every four days by ThaiVietjet, with roundtrip ticket fetching VND4.8 million (US$211) per passenger.

People who travel in group of at least ten members will be able to buy tickets at VND4.5 million ($198) each.

The company noted that there is no one-way ticket.

WorldTrans Travel and Transport Services had previously launched direct flights from Can Tho to Bangkok, Nha Trang and Da Lat.