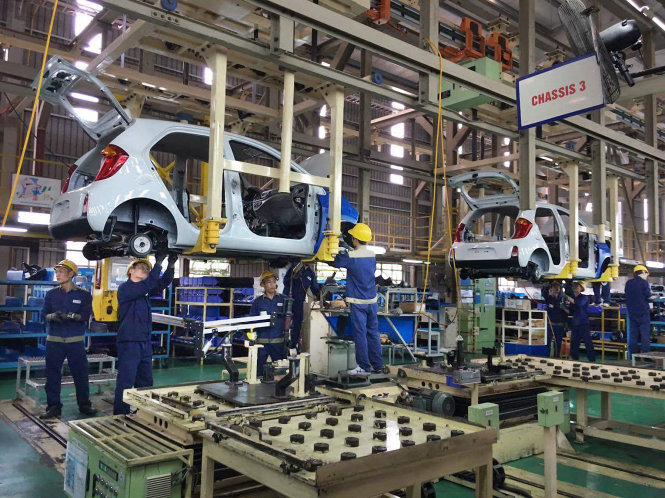 The groundbreaking ceremony of a new car factory last week by Vietnam’s leading property developer Vingroup has renewed hope that the Southeast Asian country will soon be able to produce cars domestically.

In the first phase of the US$1.5 billion investment, the Vingroup facility, located in the northern city of Hai Phong, expects to produce between 100,000 and 200,000 vehicles annually, including five-seat sedans, seven-seat SUVs and electric motorbikes.

The realty developer has dipped its toe into the car-manufacturing sector at a time when major carmakers in Vietnam, both domestic and international, are shifting towards the import of fully assembled vehicles for sale in the country, rather than have them domestically assembled.

When imports are more profitable

Carmakers in Vietnam have two options for operating: importing and selling fully assembled units, or importing spare parts and assembling them domestically before selling.

With Vietnam’s import duties for cars steadily falling - expected to reach zero percent by 2018 - it is now more profitable for manufacturers to choose the first option.

Toyota Vietnam and Honda Vietnam, both of which have factories in the northern province of Vinh Phuc, have led the trend over the past few years.

Starting in 2017, when Toyota stopped assembling its Fortuner model in the Vinh Phuc plant, and Honda did the same with its Civic brand, both switched to selling imported fully-assembled vehicles.

Toyota Vietnam maintains domestic production of only four of its models, the Camry, Corolla, Innova and Vios, with a total production volume of 43,000 units per year, according to the Vietnam Automobile Manufacturers' Association (VAMA).

The moves by the two major carmakers have reduced Vinh Phuc’s tax revenue in the first half of this year by VND7 trillion ($308 million) compared to the same period last year, according to the province’s tax department.

The central province of Quang Nam, home to the car manufacturing complex of Vietnam’s Truong Hai Auto, also suffered a reported tax loss of some VND3 trillion ($132 million), according to a source close to Tuoi Tre (Youth) newspaper.

The situation is expected to worsen next year, when import duty for fully assembled cars from ASEAN countries will go to zero percent as per a regional trade pact. ASEAN is a bloc consisting of ten Southeast Asian nations.

In the meantime, while complete car imports will become tax-free, imports of spare car parts will still be subject to taxes, a factor that will further led carmakers in Vietnam to neglect domestic production.

Many local and international carmakers in Vietnam have therefore called on the government to issue policies to ‘save’ the local car industry, as more and more manufacturers begin focusing on imports rather than domestic production.

The government should create a policy to ensure the growth of the Vietnamese car industry, as well as provide support to reduce the price gap between cars imported from ASEAN countries and those assembled in Vietnam, according to Toyota.

Another proposal, from the Quang Nam administration, suggests that the government also cut import duties for spare car parts to zero from October 2017, so domestically produced vehicles can remain competitive with imported products.

Vietnam’s demand for cars is expected to reach up to 900,000 units annually by 2025, according to an official from the Ministry of Industry and Trade.

“If the car sector fails to grow by then, the country will be full of imported cars instead of domestically manufactured ones,” the official warned.