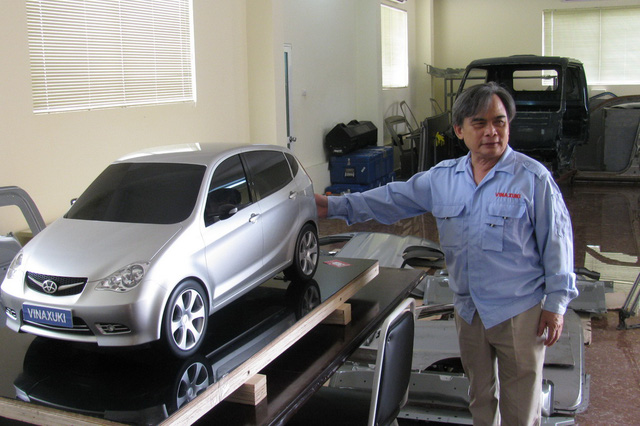 As hope that Vietnam would finally produce cars domestically was renewed after construction of a new car factory began last week, one of the first local engineers who attempted to realize the dream has recalled how he failed as a pioneer.

Now past his 70s, Bui Ngoc Huyen currently lives in his shutdown car factory in Me Linh, outside Hanoi.

Huyen is the founder of Xuan Kien Auto, a company set up with the ambitious goal of producing locally made cars affordable for the Vietnamese.

Xuan Kien began its operation by manufacturing trucks branded Vinaxuki at two factories, one in Me Linh and the other in the north-central province of Thanh Hoa.

During its heyday between 2009 and 2011, Vinaxuki trucks were ubiquitous across the country.

“There were times when dealers had to rent rooms near my factory, waiting to take the trucks as soon as they left the factory,” Huyen recalled the good old days.

Encouraged by his success in the truck market, Huyen moved on to proving whether he could make Vinaxuki cars that cost only VND100 million (US$4,400) for local consumers.

The engineer and entrepreneur turned to Japanese experts to help with design and training tasks, and earmarked a VND250 billion ($11 million) investment for the carmaking master plan.

However, in 2012, the economy faltered, with bank loan interest rates skyrocketing to nearly 20 percent a year.

Banks stopped lending money to Vinaxuki at affordable interest rates, forcing Huyen to sell off his own house and that of his son to repay his debts.

The challenges were so big that Huyen eventually had to shut down both of his Me Linh and Thanh Hoa factories, and made use of the abandoned land plots to grow vegetables.

But the made-in-Vietnam car pioneer has never given up.

Late last year, Huyen submitted a 20-page petition to the government, seeking to have his debts extended so he could start restructuring the business.

The government accepted the petition and tasked the investment ministry with studying if it could help the man who dreams big.

Huyen confirmed that he had never given up on the aspiration to improve Vietnam’s carmaking industry.

“I will continue writing petitions to the government and the prime minister,” he said.

Huyen said he can have his two factories resume operations as soon as his debts are allowed to be restructured.

Acknowledging that finance is one of the reasons behind his failure, Huyen said Vingroup, the developer of the headline-grabbing Vinfast car factory in the northern city of Hai Phong last week, does not face this challenge.

As Vietnam’s leading property conglomerate, Vingroup has strong financial muscle, plus a committed $800 million in credit from the Swiss Credit Suisse Group, which Huyen said are all big advantages for Vinfast.

“Their deep pockets will allow Vinfast to acquire technology and invite experts to help them realize their dreams, and eventually they will be able to make cars,” Huyen said.