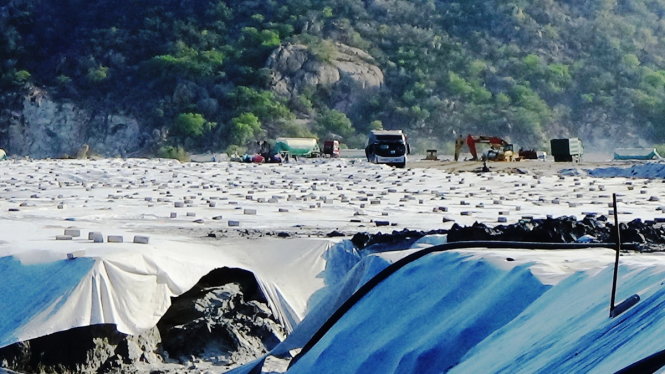 Huge mountains of coal ash are looming large in southern Vietnam’s Mekong Delta, experts said at a conference on Tuesday.

Most coal-fired electric power plants produce coal ash in the form of fly and bottom ash, left after coal is combusted.

During the coal-burning process, fine powdery fly ash is carried up the smoke stack, while the coarser bottom ash, also known as slag, falls to the bottom.

While there is presently only one active coal-fired power plant in the Mekong Delta, the collected coal ash already totals 1.8 million metric tons per year, Truong Quang Hoai Nam, deputy chairman of the administration of Can Tho, said at the conference held by the construction ministry.

“By 2020, the total amount of coal fly ash and slag will rise to around 4.13 million metric tons,” Nam warned.

“And by 2030, when there will be nine similar facilities operating in the region, that figure will be as high as 13.6 million tons per year.”

Nam said the huge amount of coal waste from the thermal power plants pose a huge threat to the environment.

The Can Tho leader underlined that this amount of coal ash will affect the Hau River, one of the two biggest rivers in the Mekong Delta, as well as the lives of millions of people living along its banks.

“How will the coal waste be treated? What kinds of technology will be deployed to prevent the environmental impact on plants? How can we ensure that coal ash will not affect the ecosystem and lives of local people along the Hau River?” Nam asked.

Pham Van Bac, head of the construction material department under the Ministry of Construction, said there are now 21 operational coal-fired power plants across Vietnam.

By 2018, these facilities will release some 61 million metric tons of coal waste per year if no effective treatment methods are put in place, he said. This figure will rise to 109 million tons by 2020, and 422 million tons by 2030, the official claimed.

Bac also confirmed figures provided by Nam that by 2030, there will be nine coal-fired power plants in the Mekong Delta, producing a total coal waste of 13.67 million tons per year.

At present, the plants are allocated specific land plots for the coal ash to pile up, but they will soon run out of available land for this purpose.

One of the ways to recycle the bottom ash is to use it as construction material in place of sand.

However, Vietnam currently has no official regulations for the use of coal slag in construction, Le Hong Tinh, deputy chairman of the technology, science and environment committee under the National Assembly, said.

He thus urged that the practice be regulated as there is huge demand for sand and reduced supply in the Mekong Delta.