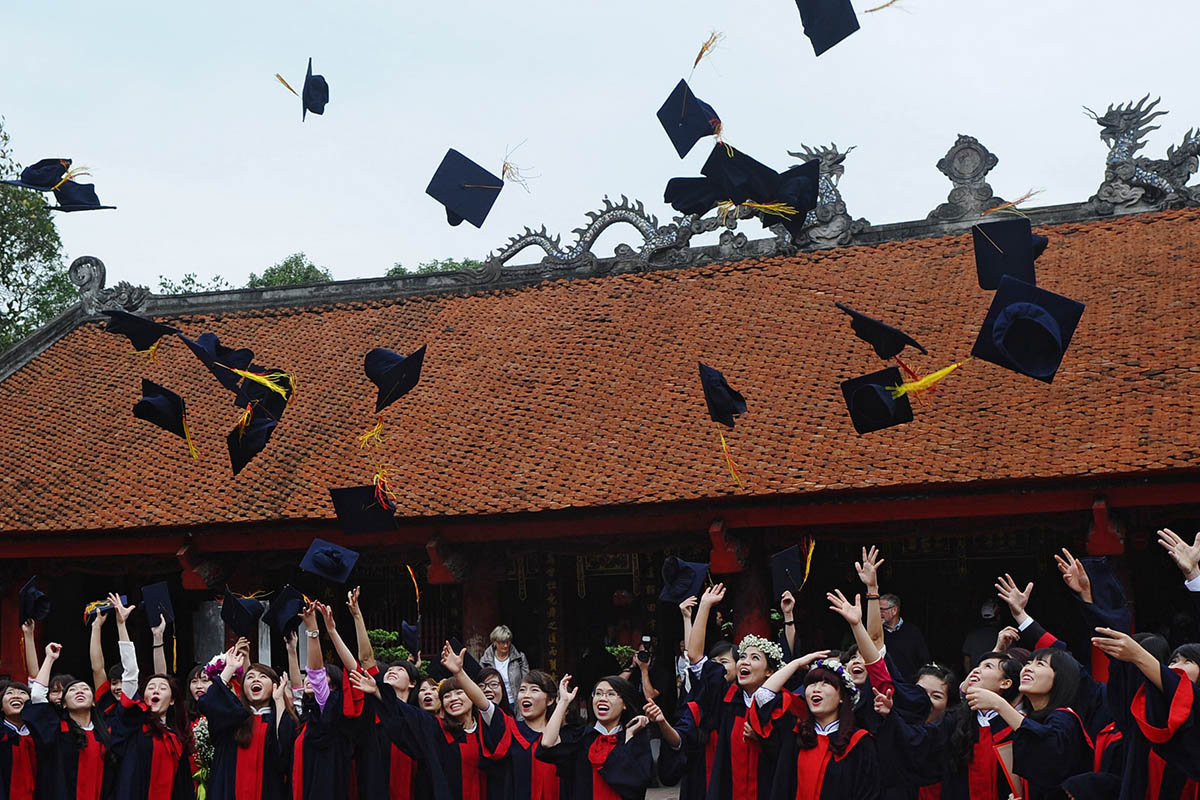 ​‘Too hard for girls’: IT student defies Vietnam’s gender norms

Just a short three years ago, Pham Thu Huong had no email address, no Facebook account, and no time ever spent at the internet cafes that sprout like weeds around Vietnam. In fact, she had almost never laid her hands on a computer.

And yet now she is wrapping up her college degree in computer science, eager to try her hand at writing code for a video game starring a bird, and impressed by all the programming language that has to be learned before one can print a simple greeting: “Xin chao, the gioi” – or Vietnamese for “Hello, world.”

With the support of Microsoft’s YouthSpark scholarship, Huong has been able to spend more time on her school work and less time on side jobs. The program seeks out promising young women with an interest in tech studies and is managed by the Center for Education and Development, a nonprofit group based in Hanoi. Students apply by writing an essay about their professional goals andproviding background details about their financial need.

While there is a focus on the technology sector, the program taps into a much broader trend. Vietnam has a tradition of individual entrepreneurship that dates back further than the birth of most countries, from the merchants who received colonial ships in the Saigon port, to the traders who have crisscrossed the land border with China.

But the modern change brought by information technology is updating this tradition, carrying with it the spirit that anyone with enough smarts and sweat can do well, no matter his or her background.

For Huong that background is in the village of Nam Dinh, more than 100 kilometers from the capital of Hanoi, where locals are known for their tofu and bamboo hat trades. In Nam Dinh, her mother carried the family, selling vegetables and pork to support a sick husband and son. Huong never dared ask her parents for the few cents it would cost to play games at the nearby cyber cafe. Though the village had an internet connection, as far as Huong was concerned, the World Wide Web still was not wide enough to make it to her small corner of the world.

When she finally came around to the idea of a future career in tech, the reaction from friends, relatives, and neighbors was surprisingly consistent: What is a girl doing in IT?

“They said it’s hard, possibly too hard for girls,” Huong said in an interview one recent, sunny weekend after arriving on motorbike. “They still think of it as a boy thing.”

Vietnam makes gender equality a core part of its national agenda, from the grade school textbooks that teach of the Trung sisters’ fight for Vietnamese independence, to the workplace policies that protect expecting and new mothers. But gender norms still live on. And in Huong’s hamlet, people were mostly used to the image of boys and computers. Far better for her to go into a normal job, they told her, like teaching.

Her ailing father, though, was not among them. With a nostalgic smile, Huong reminisces about how he encouraged her to work in tech. With technical skills, he figured, she could find a job easily and not have the financial struggles that he did. Huong had thought she’d study pedagogy, but out of respect for him, she considered the alternative. She started to spend time tinkering with the computer at an uncle’s house and became amazed at all the information available at her fingertips. Eventually she applied as a computer science major at National University, in the capital.

Huong became one of 80 coeds to receive a YouthSpark Scholarship this year, open to eight universities all across Vietnam. With their focus on IT-related degrees, the scholarships mesh well with the country’s broader economic development goals. The government has put technology at center stage, having co-founded its own accelerator, introduced tax and other incentives for tech startups in the Law on Supporting Small and Medium-Sized Enterprises, and hosted campaigns to get more companies to do business online.

But females have not been at center stage. Their illiteracy rate is twice as high as that of males in Vietnam, and they earn 75 cents for each dollar earned by men. In a telling sign of the disparity in Science, Technology, Engineering, and Mathematics (STEM), Huong said there are 56 computer science majors at her school – and only eight are female, including her.

Still, she’s excited to dig into computers, games, and all the intricacies inside them. A Microsoft employee gave her a laptop, which she uses to practice coding.

“When you play a game it looks really nice, but when you study computer science you realize that, for the game to be like that with no bugs, people need a lot of knowledge and experience,” Huong said. “It’s so cool – you know exactly the logic, what command leads to what result.”

After graduation she is contemplating a job as a software test engineer. Toshiba Vietnam, the Japanese tech giant, has already offered her a full-time position. What’s next is up to Huong.