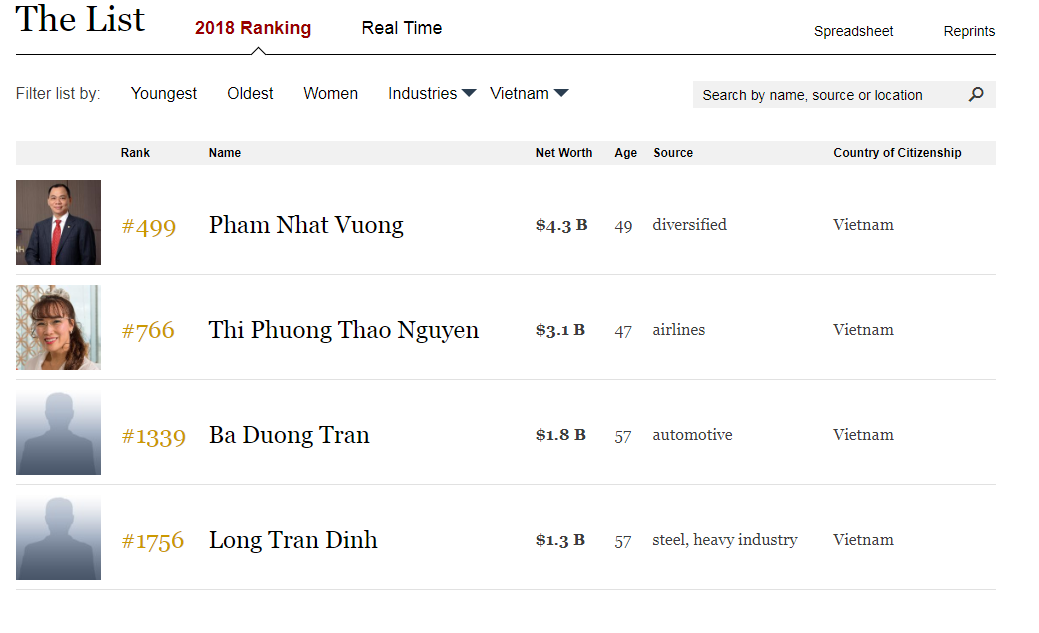 Vietnam’s business tycoon Pham Nhat Vuong, the boss of multifaceted conglomerate Vingroup, took the 499th place with a net worth of US$4.3 billion, whereas Nguyen Thi Phuong Thao, CEO of low-cost carrier Vietjet, placed #766 with $3.1 billion.

Vuong and Thao, who were both in the 2017 list, were joined this year by two fellow billionaires, who made it for the first time to the ‘world’s richest club’ – Tran Ba Duong, chairman of automaker THACO, and Tran Dinh Long, chairman of steelmaker Hoa Phat Group.

Long and Duong were among 259 newcomers of Forbes’ The Billionaires 2018 list.

Forbes called its list the ‘three-comma club,’ referring to the number of commas needed to separate the ten-figure net worth of the richest people on the planet.

In 2018 the U.S. magazine pinned down a record 2,208 billionaires from 72 countries and territories including the first-ever from Hungary and Zimbabwe.

This elite group is worth $9.1 trillion, up 18 percent since last year, with a record average net worth of $4.1 billion.

Americans lead the way with a record 585 billionaires, followed by mainland China with 373.

Amazon CEO Jeff Bezos secures the list’s top spot for the first time, becoming the only person to appear in the Forbes ranks with a 12-figure fortune, making him a centi-billionaire.

With his fortune now, $127.3 billion, leaping more than $39 billion, the list’s biggest one-year gain ever, Bezos has moved ahead of Bill Gates, who is now number 2 with a net worth of $90 billion.