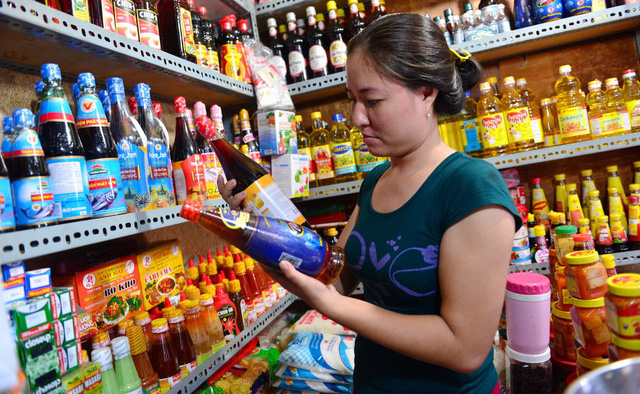 A government decree on increasing micronutrients in food production is causing difficulty for Vietnamese enterprises, insiders complained at a conference in Ho Chi Minh City on Monday.

Besides, vegetable oils containing one of the components of soybean oil, palm oil, rapeseed oil and peanut oil must be laced with vitamin A, except for those used in industrial food processing.

The issuance of the decree was based on strong evidence that the exposure of Vietnamese people to iodized salt has decreased considerably in the past ten years, requiring a policy intervention as recommended by UNICEF.

After its promulgation, the decree, which was effective on March 15, 2017, faced such strong opposition from enterprises that Deputy Prime Minister Vu Duc Dam had to hold a dialogue to address it at that time.

Two years since its adoption, food businesses are struggling to implement the decree. Some businesses have even switched from automatic production to manual production only to meet this requirement.

According to Asahira Keita, deputy marketing director of Acecook, the leading manufacturer of foodstuffs in Vietnam, food fortification is complicated as the colors and properties of the products will be affected.

“The product [using wheat flour mixed with iodized salt] is duller than [the product using] ordinary wheat flour,” Keita said at the conference.

“The tough, crispy, slippery properties are also reduced, causing customers to dislike the product,” he added.

“To make products with the same properties [as before], we [Acecook Vietnam] have to invest in different costly formulas,” Keita complained.

However, WHO and UNICEF noted in a joint press statement that food fortification, including use of fortified food ingredients in processed foods, is already the global norm, with no detrimental impacts upon the final food product or business profitability and sales.

On the other hand, food fortification contributes to a smart and healthy population, which benefits society and national development, including competitiveness, according to the organizations.

At the conference, the business representatives also blamed the decree for affecting foodstuff export as many countries in the world banned the use of micronutrients that Vietnam required.

Those products, with micronutrients added, must secure the host government’s permission and quality announcement, becoming very troublesome for exporters.

To both follow the decree and still be able to export to overseas markets, foodstuff manufacturers will have to separate current production lines into two production segments, including one using ordinary wheat flour for export and the other using micronutrient-added wheat flour for the domestic market.

“Even this way is costly and time-consuming but produces low efficiency,” the deputy marketing director of Acecook said.

A drop in the ocean

Lam Ba Nhi, quality control director of Vietnam's leading meat processor Vissan, said that after more than a year of implementation, VISSAN encountered many inadequacies during and after the production process.

“The results of the company’s experiments showed that iodized salt, after put into its foodstuffs including sausage, canned meat and frozen products in accordance with the regulations, remains very little in the products after all,” Nhi said.

“It is because the heat treatment during the production process decomposes iodine from the products, causing the iodine to no longer exist in the finished products,” he explained.

This means it is impossible for iodized salt, after added to the products, to reach the content level as the Ministry of Health (MOH) requires when tested.

“This is a huge waste for our business,” the quality control director complained.

“The government should encourage people to take iodine supplements through the direct consumption of iodized salt or via a variety of natural sources of iodine such as dark green vegetables, potatoes and seafood,” Nhi suggested.

However, MOH has yet to amend Decree No. 09 in the year to date.

“We suggest that MOH should soon amend Decree No. 09 in the spirit of Resolution No. 19-2018/NQ-CP, not requiring but only encouraging food producers to use iodized salt,” said Nguyen Hoai Nam, deputy general secretary of VASEP.