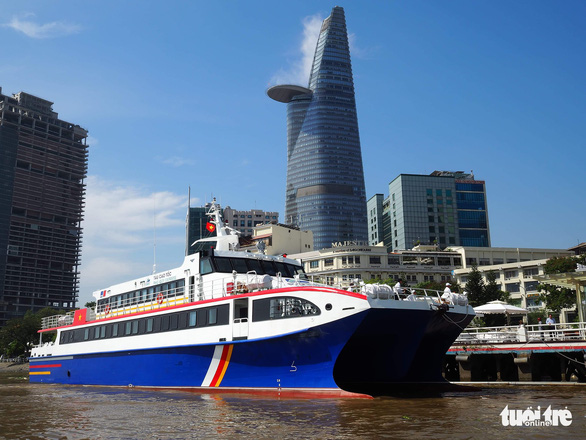 A high-speed passenger ship capable of traveling between Ho Chi Minh City and Con Dao Island off the southern province of Ba Ria - Vung Tau in five hours is slated for official operation in March, the ship operator announced earlier this week.

Phu Quy Express high-speed ship by GreenlinesDP, a company specializing in providing fast ferries, had a test run on the routes of Ho Chi Minh City – Con Dao, Con Dao – the Mekong Delta city of Can Tho, and Can Tho – Con Dao on Friday, according to general director Tran Song Hai.

The double hull ship was manufactured at the Z189 shipyard in the northern city of Hai Phong on international standards of maritime safety equipment, including security cameras installed across the ship, and flat-bed seats divided into private air-conditioned rooms.

launched last month, the ship is designed to reach a maximum speed of over 30 knots (55km) per hour and can operate normally during rough seas, withstanding waves of level 7 and 8.

The vessel can transport as many as 300 passengers on its 230 flat-bed seats and 70 high-class seats from Ho Chi Minh City’s Bach Dang Wharf to Con Dao Island in just five hours at a speed of 27-30 knots per hour.

The Can Tho – Con Dao route, on the other hand, will take three to 3.5 hours traveling on Phu Quy Express high-speed ship.

Currently, boarding flights to Con Dao from Ho Chi Minh City takes less than an hour but tickets are pricey and often sold out as VASCO, a subsidiary of the national flag carrier Vietnam Airlines, is the only airline offering the service.

Another option to travel to Con Dao is to take a high-speed boat departing from the Mekong Delta province of Soc Trang for 2.5 hours. But Soc Trang is 240 kilometers or a five hour’s drive from Ho Chi Minh City.

In the upcoming weeks, the Phu Quy Express high-speed ship will continue to be put into test runs to check its features, stability, speed, safety and comfort for passengers, according to general director Hai.

After that, the ship operator will seek approval for its official operation on the two above-mentioned sea routes by April 30

Phu Quy Express is expected to be the first high-speed ship satisfying the demand for faster travel among local residents, as well as promoting sea-route tourism.