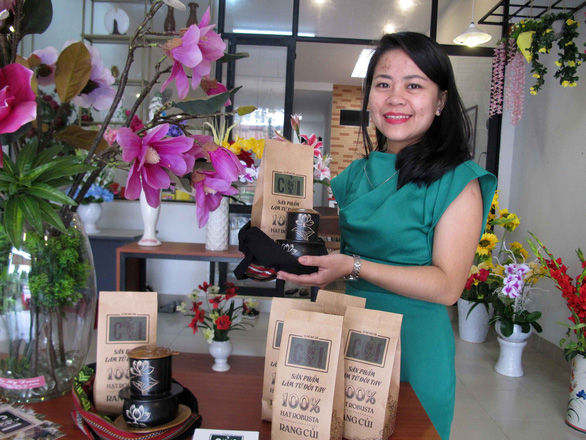 A Vietnamese woman has founded an enterprise that sells coffee in combination with traditional handicrafts to increase its competitiveness in an area already long famous for coffee production.

Also contained in the bag is a porcelain filter kit created in the country’s well-known Bat Trang pottery village in Hanoi.

After graduating in interior design from a college in Ho Chi Minh City, Ha worked for an architecture firm for a year.

She then cooperated with several friends skillful in fashion design to open a wedding attire shop in the metropolis’ downtown.

But a year later she decided to leave the city with her husband for the Central Highlands, where she had the chance to enjoy coffee given by a relative.

As she was strongly impressed with its taste, an idea of making money with the type of coffee germinated in her.

She began giving free coffee to people she knows and received their feedback so that she could make it more palatable to connoisseurs in general.

To make her products sold in a different way in the Central Highlands, where a number of coffee businesses are operating, she has robusta coffee put in handmade bags created in the region and sold with free porcelain filter tool sets.

“I hope customers who buy our coffee can recognize a traditional cultural signature of the Central Highlands,” the 32-year-old woman said.

She now sells her products on the Internet and has knocked the doors of corporate customers in the potential enormous market of Ho Chi Minh City.

She has received over 1,000 orders, with praise from users, including foreign ones.

“I believe that if one wants to succeed in business today, they have to genuinely love customers,” she said.

“Anyone who can provide a better consumption experience and a value greater than the money their customers spend on a product will open up more opportunities.”