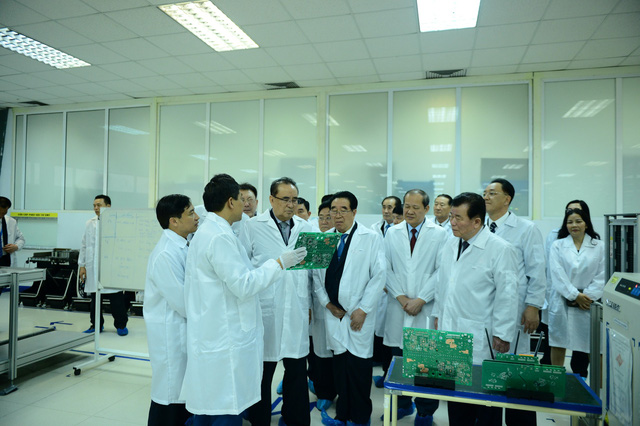 North Korean officials have expressed hopes of cooperating with Vietnam’s Viettel Group following their visit to the military-run telco’s complex in Hanoi.

The high-ranking delegation visited a civil equipment research and production complex operated by Viettel Military Industry and Telecoms Group, located in the Hoa Lac Hi-Tech Park on Thursday afternoon, and were apparently impressed with what they saw.

All three also serve as vice-chairmen of the WPK Central Committee.

The officials were hosted at the facility by Vietnam’s Colonel General Be Xuan Truong, Deputy Minister of Public Security, and Viettel leaders.

The visit was part of the officials’ trip to Vietnam for the second U.S.-North Korea Summit that ended on Thursday in Hanoi and Chairman Kim Jong Un’s official visit to Vietnam scheduled for March 1-2.

The group was also introduced to Viettel’s core telecom equipment system and several devices and solutions it has developed for the fishing industry.

According to vice-chairman Ri Su Yong, North Korea has heard about and been impressed by Viettel’s technology.

The country is interested in telecommunications products developed for supporting smart communities, Ri shared, adding that he hopes both sides can strike a deal to move forward with cooperative efforts in the field sometime in the near future.

On the morning of the same day, they paid a trip to the Vietnam Agriculture Science Institute in the capital, as well as the northern province of Hai Duong.