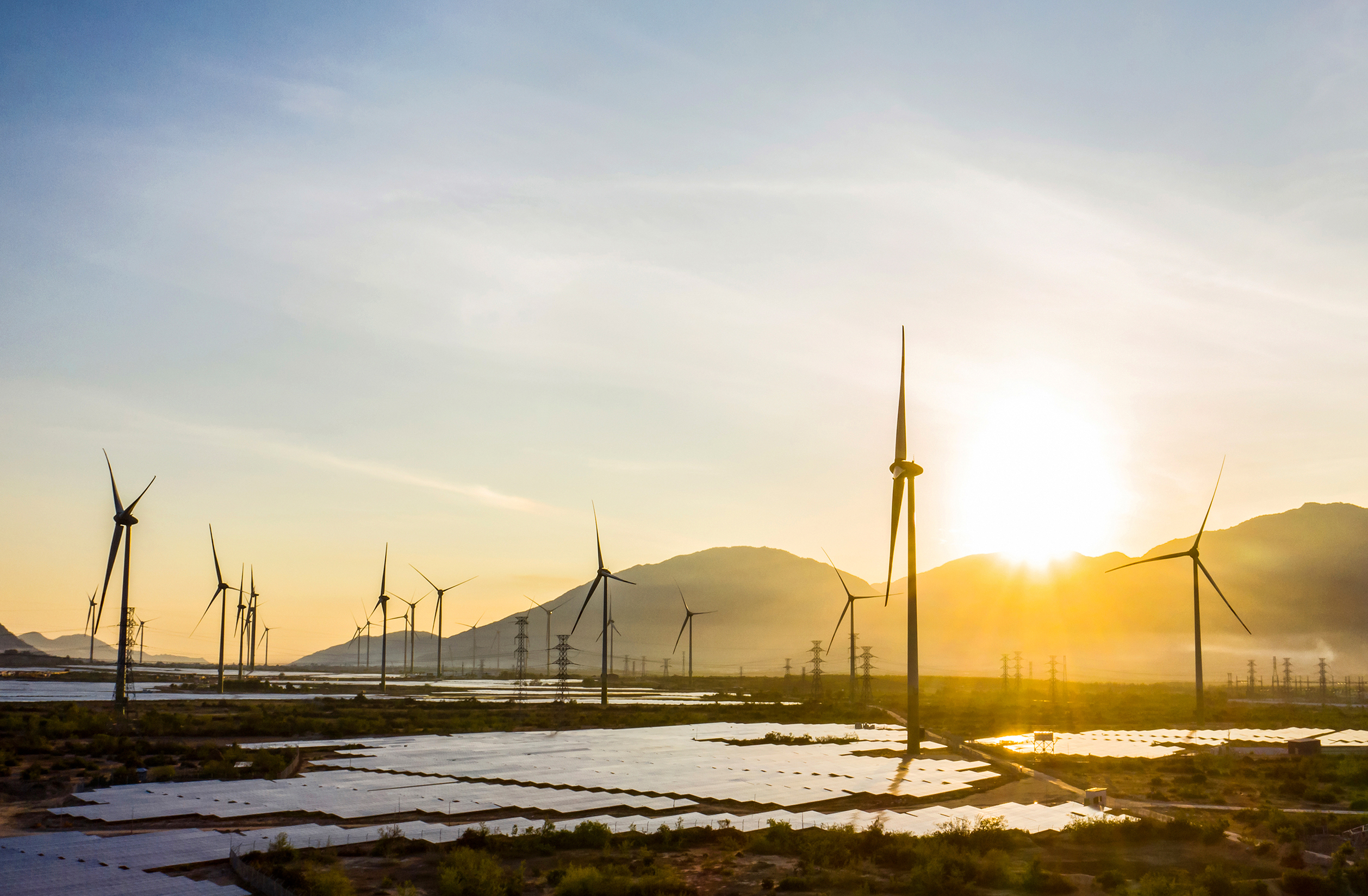 Vietnam all set for leading SE Asia in renewable energy

“I am going to retire soon from promoting solar rooftop projects, and I will be so happy," Nguy Thi Khanh said on her Facebook in July.

As the founder and executive director of Green Innovation and Development (Green ID), a Vietnamese non-profit working to promote sustainable energy development in Vietnam over the last 10 years, Khanh has been known for her tireless effort to promote solar rooftops and other environmental solutions in the country.

And it is hard to believe that she will be retiring.

However, Khanh is confident that the government has stepped in and will help bring rooftop solar projects to a new level.

Khanh shared her high hopes at a meeting hosted by the Ministry of Industry and Trade on July 9 about sustainable development and connecting the national grid to renewable energy sources and solar rooftops.

In 2018, Green ID launched the One Million Green Roofs Initiative. Back then, “many people thought that we would fail as the goal was too ambitious and unrealistic,” she recalled.

Two years later, when Vietnam Electricity Southern Power (EVN SPC) announced their aim for two million solar rooftops during a July meeting, it was a sign that things had changed and the country was moving in a greener direction.

As of December 15, according to the website operated by the Vietnam Electricity Group (EVN) to help individuals who want to build a solar system on their rooftops, the Southeast Asian nation had seen more than 76,310 solar rooftop projects contracted with the combined capacity of 3,414 MW.

“This is a very impressive achievement of Vietnam with solar rooftops,” Tobias Cossen, director of the Clean, Affordable and Secure Energy for Southeast Asia (CASE) project in Vietnam, said in a meeting with EVN in Hanoi on September 9.

Agreeing with Cossen, Khanh believes that households in Vietnam do not expect financial support from the government as they see the investment in solar rooftops as clearly profitable.

“We put aside VND440 million [$18,919] a year ago, and used that to cover the rest of our rooftop this year. From now on, our electricity bill will be zero,” Chi explained excitedly.

At the time of the interview, the electricity bill of her restaurant was about VND11.5 million (494) a month.

Since the contractor took care of everything, Chi said that she did not know much about the technical side of the project.

However, she did note that the investment cost has reduced over time. Despite a capacity increasing over three times more than her first solar cells, her spending has dropped threefold.

With this type of project becoming more affordable, can it be a channel for profit?

The answer clearly depends on how the electricity output is used.

Since solar rooftops produce the type of energy that is supported by the Vietnamese government, it is possible for a family with extra volume to sell it to EVN.

Despite this, Chi cautions those who might seek to make a profit.

“My family uses electricity a lot in the day. Therefore, the solar rooftop helps save our bill. However, I don’t think any family should invest in this system only for the purpose of selling it to the national grid,” Chi said.

Vietnam a capital of renewable energy

In Ninh Thuan Province, about 120km from the coastal city of Nha Trang, thousands of workers raced against time under the strong sun to complete the biggest solar farm in Southeast Asia.

By the end of September, only 102 days after the project started, the solar farm was able to begin testing its connection to the national grid.

Sun and wind, once deemed adverse conditions for the livelihood of the people in the province, are now seen as valuable resources thanks to renewable energy projects.

When it comes to wind, Ninh Thuan’s average wind speed is the highest in Vietnam, ranging from 6.4 to 9.6m/s, against the national average of 6m/s.

The province also has wind at least 10 months/year and hardly any storms, which creates stable conditions for wind turbines to operate.

Given these statistics, it is no surprise that Ninh Thuan’s leaders said that the total capacity of approved solar power projects in the province was 2,417 MW in October.

In regard to wind energy, Ninh Thuan has deployed and put into operation wind turbines that will produce about 229 MW by the end of 2020.

There are also 10 wind power projects due to come online in 2021 with a total capacity of 447 MW, which will bring the total number of projects in the province to 13 that can annually produce 678 MW.

Ninh Thuan is taking the lead in Vietnam for the number of renewable energy projects. In fact, the region was producing so much power that it was facing troubles with main grid connection.

At the Vietnam Energy Forum held in July, Duong Quang Thanh, chairman of EVN's board of members, said that by the end of this year all solar power plants in Ninh Thuan and Binh Thuan Provinces will have been able to operate at full capacity without any issues connecting to the national grid.

“The energy transition in Vietnam is following a very good trend and should be maintained in the long term as it will greatly support the green growth process,” said Nguyen Anh Dung, an officer for Deutsche Gesellschaft für Internationale Zusammenarbeit (GIZ).

The shift to renewable energy, especially solar power, in Vietnam is among the best in the world, thanks to the new Feed-in Tariff price incentive policy of the government.

As noted in the Renewables 2020 Global Status report (REN21), Vietnam ranked 5th in the world in terms of solar energy in 2019.

The current percentage of renewable energy, not including hydropower plants, in Thailand is 12.5 percent and 13 percent in Vietnam, Dung said.

In the future, Thailand aims for 35 percent of renewable energy by 2037, whereas Vietnam targets 37 percent by 2040.

In part, this transition occurred because of advancements in technology and techniques.

In the 1980s, to finish the 400 MW Tri An hydroelectric plant, Vietnam needed 10 years of hard work.

By 2020, the 450 MW solar power plant built by Trung Nam Group, the largest one in Southeast Asia, needed only 102 days to be completed.

On the global market, technology to support renewable electricity has become more efficient and competitive.

Along with this, panels can generate power on both sides. In terms of wind power, the capacity has also risen from 1 MW to 2 MW and now 5.5 MW.

“However, due to the land scare in Vietnam, land-based solar power plants will be limited in the near future. Thankfully, there are still opportunities for developers to install wind power on mountains, near the shore and off-shore. In the next 10 years, investors will also explore tidal power,” Tien said.

The Vietnam Energy Update Report 2020 by the Center for Communication and Development Initiative (MDI) remarked that renewable energy has made significant strides in the country and Vietnam has become a leader in Southeast Asia.

Laurence Tubiana, CEO of the European Climate Foundation (ECF), agreed with this assessment.

“Over the past year, Vietnam has begun to mark itself out as a clean energy success story. Though there is some distance to go, its shift away from coal and rapid uptake of renewables make it one of the leaders in Southeast Asia, and an example to other nations looking to transition,” Tubiana said.

In order to maintain this standing, direction has been issued from the highest level of government through Resolution No. 55-NQ/TW on February 11 to reduce the proportion of coal in the energy mix, instead giving priority to liquified natural gas (LNG) power, wind, and solar energy.

In relation to this, at least six provinces across the country have proposed canceling coal-fired power projects due to environmental concerns about pollution, including Quang Ninh, Vietnam's main coal producing region.

According to the Institute of Energy of Vietnam, the report’s vision will be solidified in the Power Development Planning VIII, which was recently submitted to the government.

At the first seminar on Power Development Planning VIII on July 8, Matthew Heling, an energy consultant in the Asia-Pacific region for the Afry Company, commented: “Vietnam and Malaysia in the near future are the most promising countries in Southeast Asia for renewable energy.”

With the actions being taken to continue the transition, both by the people and the government, it seems Vietnam will remain a bright example.