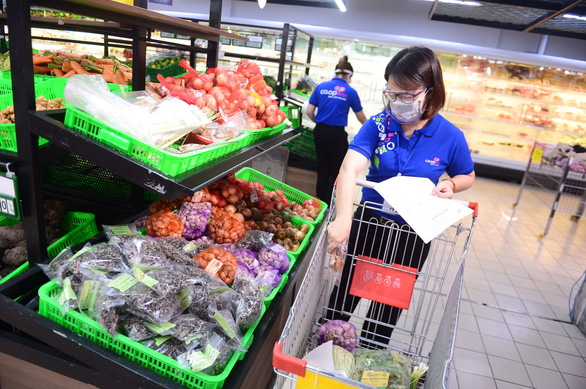 Many retail outlets in Ho Chi Minh City have decided to close five hours earlier than normal every day starting Monday, as a response to fresh outdoor travel restrictions imposed by local authorities.

Such adjustment has been made after the municipal administration banned residents from going outdoors from 6:00 pm to 6:00 am the next day, from Monday until further notice, as part of the measures to reduce surging COVID-19 infections.

Many retailers of food and other essential goods have said they will open 30 minutes or one hour earlier and shutter by 5:00 pm, instead of 10:00 pm previously.

Specifically, many supermarkets will operate between 6:30 am and 5:00 pm.

As the travel curbs begin at 6:00 pm, a number of retail stores said they will even shut down earlier, by 4:00 pm, to enable their staff to get home before the effective outdoor travel restriction time.

A representative of AEON Vietnam said that it has informed customers that it will close earlier than normal so both employees and customers can go home before 6:00 pm.

Meanwhile, MM Mega Market Vietnam said that it will cease business by 5:00 pm and open at 6:30 am, 30 minutes later than before.

VinMart and VinMart+ have also announced the new operation time, from 7:00 am to 5:00 pm, applicable to their 500 outlets in Ho Chi Minh City.

Similarly, the same working hours will be adopted at MEATDeli stores in the city.

Along with such early closures, supermarkets have planned to increase mobile sales and boost online trading to meet the demand of customers, given the outdoor travel restrictions and other epidemic prevention measures.

City authorities have been enforcing control rules under the prime minister’s Directive 16, including the closure of non-essential businesses and services, a stay-home order, a ban on gatherings larger than two people, and the suspension of public transport.

Accordingly, residents are completely prohibited from going out, except for seeking medical treatment and buying food at designated points.

Since early 2020, when the pandemic erupted in Vietnam, the city has documented over 62,900 COVID-19 cases, including more than 14,700 recoveries and 561 deaths, the municipal Center for Disease Control reported on Monday morning.

Nationwide, the total number of patients has so far reached 101,173 cases, including 19,342 recoveries, according to the Health Ministry’s data.