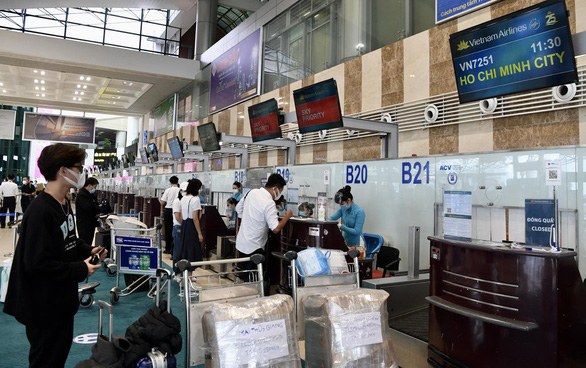 Vietnamese airlines canceled a number of flights on Sunday, the first day selected domestic routes were resumed, due to the impacts of Storm Lionrock and complicated quarantine regulations at their destinations, according to the Civil Aviation Authority of Vietnam (CAAV).

The lack of detailed instructions on quarantine regulations in Hanoi also prevented the two carriers from carrying out the flights from Ho Chi Minh City and Da Nang City to the capital city.

Tickets for Vietjet’s flights between Ho Chi Minh City and Phu Yen and Gia Lai and from Da Nang to Can Tho, as well as Bamboo Airways’ flights between Da Nang and Dak Lak were not open for sale in time.

Meanwhile, many passengers decided not to board Bamboo Airways’ flights between Ho Chi Minh City and Quang Binh over COVID-19 quarantine requirements.

The hybrid carrier’s other flights from Ho Chi Minh City to Thua Thien-Hue also received a lukewarm response as passengers were requested to register for admission from the central province’s authorities in advance.

Although the relevant localities and the Ministry of Transport had reached an agreement on the flight resumption, in reality, each locality added different requirements.

Thua Thien-Hue’s admission request, which the transport ministry did not originally stipulate, is just one example.

The CAAV proposed the transport ministry request localities to abolish the centralized quarantine regulations and issue specific stipulations concerning COVID-19 prevention measures, such as transporting arrivals from their airports to other localities.

Leaving middle seats vacant as a social distancing measure should also be discontinued to reduce cost pressures, the CAAV suggested.

Vietnam has documented 835,036 community transmissions in 62 out of its 63 provinces and cities since the fourth – and worst – virus wave emerged on April 27.

Since the COVID-19 pandemic first struck the country early last year, the national tally has reached 839,662 patients, including 782,199 recoveries and 20,555 deaths.

The government has gradually reopened the national economoy since early this month given decelerating daily infections thanks to social distancing measures and sped-up vaccinations.

Health workers have administered over 53 million vaccine doses since inoculation was rolled out on March 8.