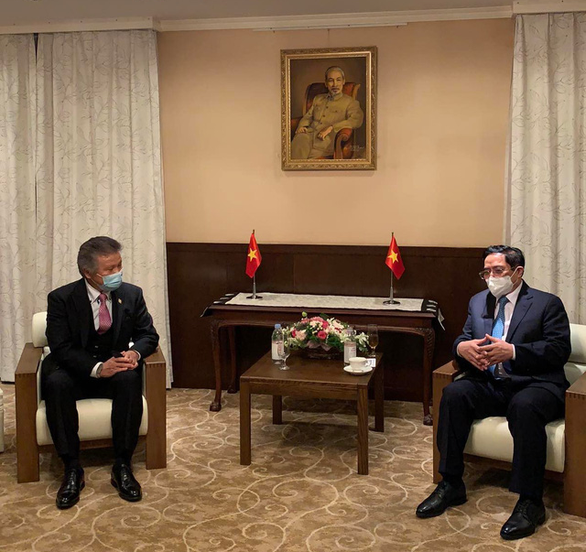 The Japanese consume around 10,000 metric tons of pufferfish each year, according to Business Insider, but Japan's quality of wild puffers has decreased over the years, so Vietnam can explore the potential of a future market for the fish.

During his official trip to Japan in late November, Vietnamese Prime Minister Pham Minh Chinh had a meeting with Ito Yoshinari, general director of Mitsui Company, to discuss how to develop an industry of pufferfish aquaculture in Vietnam.

At their meeting at the Embassy of Vietnam in Tokyo on November 23, PM Chinh said that “Vietnamese pufferfish are being wasted now."

The prime minister welcomed Mitsui’s plan to commercialize the resources effectively and successfully.

There are 49 pufferfish species in Vietnam despite many people thinking there is just one, according to the Research Institute for Marine Fisheries under the Vietnamese Ministry of Agriculture and Rural Development.

Among them are five species that are approved for use as food in Japan.

Seven others met requirements for export to South Korea but shipments were halted in 2013 due to safety control and categorization issues.

In 2020, Da Nang applied for approval to catch pufferfish again, but the plan has not started over several reasons, including food safety control and finding suitable buyers.

According to Dr. Vu Thuy Linh, the first Vietnamese Ph.D. to receive a chef’s license to prepare pufferfish in Japan and a Mitsui representative, pufferfish make up about 10 percent of purse-seine fishing output annually.

That means Vietnam gets rid of about one metric ton of pufferfish each day, equal to 37,000 metric tons a year.

As fishing puffers is banned in Vietnam, fishermen would have to release their catches back into the ocean or turn them into fertilizers that could only be sold at extremely cheap prices.

Rumor has it that Chinese traders are buying pufferfish in Vietnam and reselling them in Japan at a higher rate. This report, however, could not be verified independently.

In fact, a kilogram of wild tiger pufferfish costs up to VND5 million (US$218) in Japan.

During the meeting with PM Chinh, Yoshinari suggested several potential solutions to the development of pufferfish aquaculture in Vietnam.

The first and foremost priority is reviewing all the species of pufferfish that exist in Vietnam and then making a list of edible puffers to assure food safety, the Japanese executive said.

In Japan, there are 22 edible species among more than 40 species of pufferfish.

Given the reduction in the quantity of wild pufferfish in Japan, Vietnamese fishermen and exporters can make the most of their chances.

PM Chinh aired his hope that a pufferfish industry would be established in Vietnam and that the Southeast Asian country would not only export the whole fish but also get technology transfer from Mitsui to make finished puffer products domestically, which would add more value to the Vietnamese fishing industry.

Yoshinari, who has more than 40 years of experience in pufferfish production, said he was confident about the proposals he suggested.

“Our company has specialized in fishing puffers and making products from the fish for more than 31 years," he told PM Chinh.

"Our main partners are luxury restaurants in Japan.

“So we have enough confidence in our technology, and we are willing to exchange the technology with Vietnam."

In terms of training staff who are capable of preparing meals with pufferfish safely, the two sides agreed that it would be necessary to build a training system under the established standards, which have been developed for many years in Japan.

Japan has ended all the food poisoning cases relating to pufferfish thanks to this chef training system.

In general, there are some species of pufferfish that are known for tetrodotoxin, a poisonous compound found in the skin, liver, and ovaries of the fish.

A well-trained and skillful cook, with a chef license, will be capable of processing pufferfish safely for food.

To create a future market for pufferfish in Vietnam, Mitsui will firstly bring its safe food products to Vietnam with the aim of gradually familiarizing customers with them.

Once the market has gained traction, the company will roll out its plan on developing pufferfish farming in Vietnam.

PM Chinh assigned Vietnamese Ambassador to Japan Vu Hong Nam and trade counselor Ta Duc Minh to work out a project on connecting Mitsui with related sides to develop the puffer exploitation industry in Vietnam in the near future.

Mitsui has already worked with some Vietnamese enterprises such as Vifotec SJC, the National Institute of Nutrition, and the Research Institute for Marine Fisheries in the northern Vietnamese city of Hai Phong.

'We will definitely come to Vietnam first!'

Yoshinari gave the Vietnamese prime minister a pufferfish-shaped dish, which is a unique one made by Kutaniyaki, Japan’s 360-year-old company specializing in porcelain, under Mitsui’s order.

Presenting such a gift, the Japanese executive hoped that there would be better pufferfish among Vietnam’s species than Japan’s.

Yoshinari even thought of a so-called national pufferfish 'made in Vietnam' and exclusive to Vietnam.

The brand name of Kutaniyaki porcelain represents Mitsui’s commitment to exchanging Japanese values with the Vietnamese in their collaboration.

Yoshinari shared his view on promoting a culture of eating pufferfish internationally and said that “we will definitely come to Vietnam first” during the journey of promotion.

According to the National Institute of Nutrition, green spotted pufferfish and silver-striped pufferfish are the two species whose meat is so rich in protein and amino acids, with the level of essential amino acids higher than that of chicken or carp.

The pufferfish is also high in DHA, EPA, vitamins D, E, and collagen.