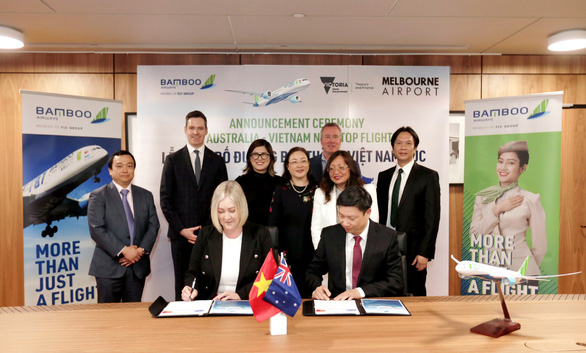 Bamboo Airways to launch direct flights to Australia in early 2022

Vietnam’s Bamboo Airways has announced its regular direct air route connecting the Southeast Asian country with Australia at a launching ceremony held at the Melbourne International Airport on Friday.

Under its plan, the carrier will officially operate commercial flights on the direct route from early 2022 to link Vietnam’s southern business hub Ho Chi Minh City with Melbourne, the capital and most populous city of the Australian state of Victoria.

The initial operating frequency is two round trips per week but may be increased to four flights per week later, depending on the actual market demand.

The flights will help shorten the travel time between the two cities to around eight hours, saving up to eight hours compared to connecting flights.

Such flights will use Boeing 787-9 Dreamliner, a type of modern, fuel-efficient wide-body aircraft with many utilities and services.

When the carrier conducts the first Vietnam - Australia direct flight early next month, it will become the first international airline to run a new route to Melbourne since the COVID-19 epidemic appeared.

Australia is the home to more than 300,000 Vietnamese, mainly concentrated in Melbourne and Sydney, the largest and most populous city of Australia.

In 2019, the arrivals of Australian visitors to Vietnam reached more than 383,000, just behind those from the U.S., Russia and some other Asian countries, according to the Vietnam National Administration of Tourism.

“We hope that coming regular direct flights will help optimize the benefits of passengers from both countries while substantially contributing to the promotion of bilateral cooperation in economy, culture, and people-to-people exchange,” Nguyen Manh Quan, Bamboo Airways’ permanent deputy general director, said at the inaugural ceremony, where the carrier and the Melbourne Airport also signed a bilateral support agreement.

The direct route will mark a new and important step in the business ties between Bamboo Airways and the Melbourne Airport since the two sides signed a memorandum of understanding on cooperation in November 2019.

Melbourne Airport Chief of Aviation Lorie Argus said she was proud to welcome a new international carrier while dealing with the COVID-19 pandemic, according to the airport’s website.

“Adding a new airline in the midst of a global pandemic is a testament to the strength of Melbourne’s tourism appeal, and our airport’s ability to handle passengers safely,” she said.

Bamboo Airways said it has cooperated with the International Air Transport Association (IATA) in testing the electronic health passport, IATA Travel Pass, which will be applied in international flights in the coming time.