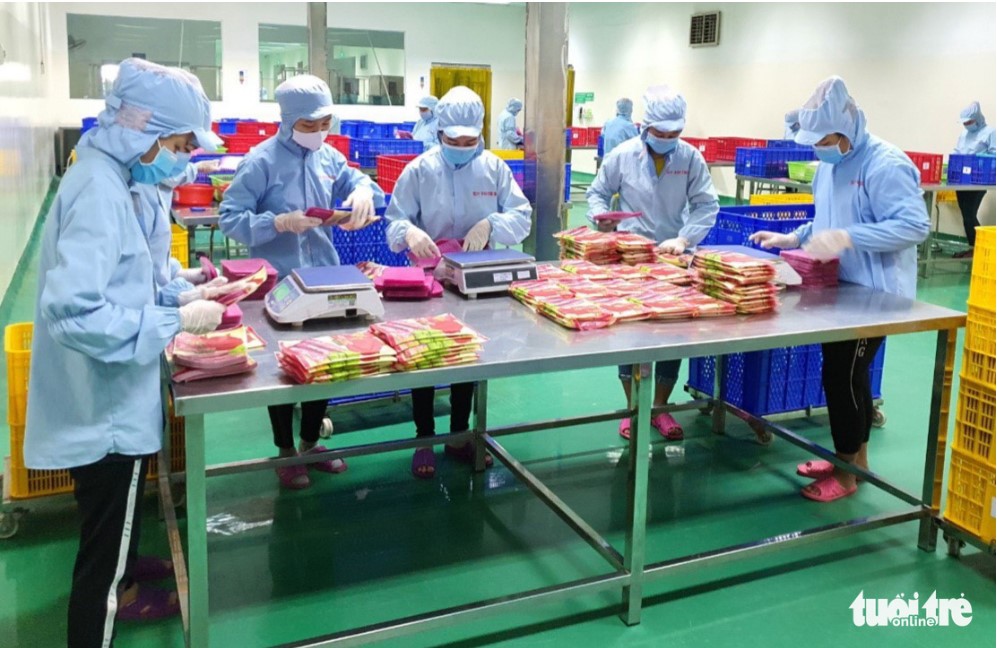 The long-standing labor shortage is causing problems for many enterprises in Vietnam, undermining production, especially in the field of export goods production.

Like many countries in the world in the post-pandemic period, Vietnam is facing labor shortage in various manufacturing sectors.

If there are no solutions for increasing the number of workers and addressing the inequality in some sectors, the understaffing will become more severe, which in turn may cause companies to lose their contracts, according to many industry experts.

Firms can only hire 60 percent of the demand

Ngo Tuong Vy, general director of Chanh Thu Import-Export Limited Company, which specializes in trading and exporting fresh fruits from Ben Tre Province in southern Vietnam, has been trying hard to find enough workers for the durian harvest, to no avail.

Vy has managed to recruit merely 60 percent of the number of workers she needs despite early preparation, she said.

It is extremely difficult for companies to find workers who are skilled in selecting and processing durians.

Like Vy, Nguyen Minh Doan, chairman of Ba Ria Rubber Company in Ba Ria-Vung Tau Province, said his company is 15-20 percent short, equivalent to 300-350 workers, while Dong Nai Rubber Corporation in the eponymous province is short of 500-600 workers every year.

Duy Anh Foods Company in Ho Chi Minh City, which specializes in the production and export of noodles and rice paper, is in the same situation.

Although the company needs 250-300 workers to fulfill orders, it can only hire 60-70 percent of its actual labor needs.

The company could increase the export of goods by 30-40 percent only if it could hire enough workers, according to a representative of Duy Anh Foods.

Tran Viet Anh, vice-chairman of the Ho Chi Minh City Business Association, told Tuoi Tre (Youth) newspaper that many enterprises are under stress because they could not hire enough workers.

The challenges are greater for firms that often need a large number of employees, such as those in the garment industry, the footwear industry, and services such as logistics, delivery, export-import, and stores.

"Because of the ongoing COVID -19 pandemic, many services have shifted online," Anh said.

"The health crisis has driven many people to get used to working in an environment where there are no strict time constraints, resulting in a notable labor dearth.

"In addition, travel costs are rising due to soaring energy prices so many workers are choosing to work from home whenever they can."

As it was difficult for Vy to find enough workers, she had to choose to produce and export at the same time, which meant it could only meet about 60 percent of customers' demand.

In some cases, her business has to split the number of goods to be sold.

For frozen durian meat, for instance, one customer placed an order for more than 50 tonnes but Vy's company did not have enough staff to prepare the goods.

"Fruit production has increased when export markets have also expanded, especially the demand for fruits from China, the U.S., and Japan, which is significant from May to November," Vy said.

"Therefore, the pressure to have enough labor will be enormous in the near future.

"If this understaffing continues for a long time, it will be challenging to improve the quality of agricultural exports."

Kieu Huynh Son, general director of Vietsteel Co. Ltd., 80 percent of whose production is exported, has adjusted his company’s monthly salary a few times so far.

Apart from raising material prices by 15 percent, the company is also hiking salaries by 7-10 percent to keep the number of workers stable.

"If we do not raise salaries, we will not be able to keep workers and fulfill orders," Son explained.

Quite a few firms cannot deliver enough products due to the shortage of labor though they have orders to filled until March, said Nguyen Van Khanh, deputy chairman of the Ho Chi Minh City Shoe and Leather Industry Association.

"Up to 80 percent of Vietnamese orders in the footwear and leather sectors must be met by laborers," Khanh said.

"Many factories will lose orders if this dearth keeps going on."

Vice-chairman Anh believes that the idea of 'taking advantage of Vietnam's abundant supply of labor' is already outdated and that it is now more important to align training at colleges and universities with job market demands.

As a case in point, while the demand for labor in the packaging industry in Vietnam is high and many foreign-invested companies are looking for workers in this sector, there are only a limited number of educational institutions offering relevant training programs, resulting in an insufficient number of qualified employees to meet the demand.

The recycling industry, which is part of the circular economy, is in the same situation.

Although every importer demands recycled products, there is no such training program in Vietnam.

Therefore, companies have to train these workers themselves, which often takes a lot of time and a large financial investment.

"The government should make labor training a priority for export industries that generate more foreign exchange or for industries that receive most foreign direct investment," Anh suggested.

Deputy chairman Khanh said many enterprises are struggling to find skilled workers to meet their needs.

"About 300 trained footwear workers are needed, and they cannot be found at the moment," he elaborated.

"Therefore, enterprises should promote cooperation with training institutions to quickly and properly staffed.

"They should also support workers with shelter and food to attract labor."

In the agricultural sector, many experts advise companies to find out where the local labor force comes from before building factories and to work with local authorities to jointly prepare for the staffing.

The garment and footwear leather sector benefits from the new situation

According to Tran Viet Anh, vice-chairman of the Ho Chi Minh City Business Association, the ongoing 'zero COVID' strategy in China has forced companies to redirect their investments to markets other than China, especially in the garment, food, and plastics industries.

Vietnam should accelerate manpower training for these sectors to reap the benefits in time.

"Due to the impact of the COVID -19 pandemic, global markets are in dire need of merchandise, especially commodities produced in China in the next three years," Anh noted.