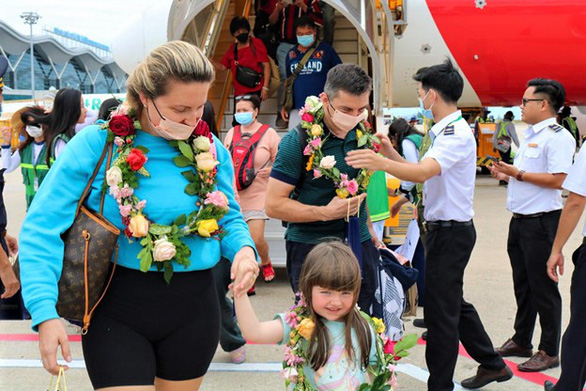 Many international air routes linked with the south-central Vietnamese province of Khanh Hoa, which is famous for sea leisure activities, have been recently reopened as authorities and airlines are joining hands in shoring up local tourism after the COVID-19 pandemic.

Recently, Air Busan has resumed its service between Busan City in South Korea and Cam Ranh City in Khanh Hoa, with a frequency of two flights a week on Thursdays and Sundays, a spokesperson of Cam Ranh International Terminal JSC (CRTC) said on Wednesday.

The first resumed flight on this route was flight BX751 with 200 passengers that landed at Cam Ranh International Airport on the evening of July 14.

On the same day, another flight carried the first 159 passengers from Muan International Airport in South Jeolla Province, South Korea to Cam Ranh after more than two years of suspension due to the COVID-19 pandemic.

For Vietnamese carriers, Pacific Airlines announced the operation of its two-flight-per-week service from Gwangju and Mokpo Cities in South Jeolla to Khanh Hoa while Vietjet Air started operating flights between Busan and Cam Ranh on Wednesday with a frequency of three trips a week.

On July 8, AirAsia reopened the Kuala Lumpur (Malaysia) - Nha Trang route with a frequency of two flights a week on Mondays and Fridays.

The first flight from the Malaysian capital city to Khanh Hoa with 140 passengers aboard touched down at Cam Ranh International Airport at 11:30 am the same day.

The number of international arrivals at Cam Ranh International Airport in the first six months of this year was 13,567, who came on 81 flights, according to CRTC director Le Thi Hong Minh.

Minh added that charter flights from Taiwan will be reconnected with the airport in September.

Earlier, a flight operated by Uzbekistan Airways on June 14 under its cooperation with Amega Co. Ltd. transported 140 passengers from Uzbekistan to Khanh Hoa for the first time ever, marking the Vietnamese province’s fresh link with the Central Asian market.

While the tourism authorities of Khanh Hoa determine that domestic tourists are their main focus, the province has attracted a large number of international visitors, Duc said.

Khanh Hoa expects to welcome about 60,000 more international arrivals in the second half of this year, according to a leader of the provincial tourism department.

It is expected that in August, the Consulate General of India in Ho Chi Minh City will work with about 50 travel and airline companies to survey Khanh Hoa’s tourism products, promote tourism in the south-central Vietnamese region to Indian visitors, and facilitate the opening of direct flights connecting Cam Ranh and India.