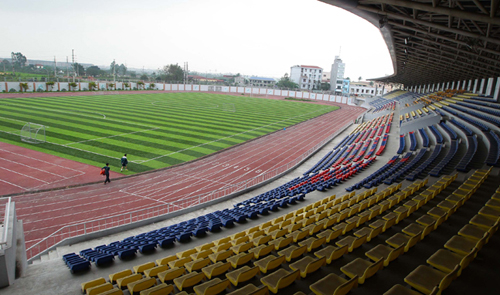 When it was announced that Vietnam had won the rights to host the 2019 Asian Games (Asiad), a lot of people were commenting on how this was a positive step and could be an event that all Vietnamese would be proud of. I was one of them.

I am no finance expert. I was merely thinking in terms of sports and the nation’s growing reputation in Asia so I reckoned that if Vietnam hosted a successful Asiad, it would reinforce its standing and would be something for the country to be proud of.

Hosting a large sporting event is always a gamble but as long as the infrastructure is in place and there is a willingness to commit large sums of money in the hope that it pays off and the economy doesn’t suffer too much, then maybe it is worth the gamble.

The cost is important and hosting the Games may cost billions of dollars. You can’t get away from that.

The Vietnamese government has yet to give the go-ahead for the Games’ organization.

Prime Minister Nguyen Tan Dung will only give the nod if ‘success is ensured’ with the presence of a feasible preparation plan. Apparently he hasn’t received a fully comprehensive plan for the 2019 event as yet. He also warns he could pull the plug if the plan isn’t up to scratch.

He knows that the eyes of Asia are on him. Vietnam accepted to host the Games and pulling out now would be equal to losing face, or the country may never be trusted to host a similar event again. He wants a plan because after all if you don’t plan, you plan to fail.

He also wants the plan to be accessible to the public so that there is no misunderstanding. Aha the public, what about them? Where do they fit in all of this? Do they back the Games? I would imagine so. No, they don’t and I believe if you don’t have the public backing, taking on such an astronomical event will throw you into trouble.

Remember it is the public who are going to be the ones buying the tickets for the sporting events, putting pictures of themselves at the events on social media and thus doing much-needed publicity for the Games. I think in Vietnam, with the public backing you can put on any event and it will be a sell-out but if not…

The London Olympics was a huge success, which no-one can argue with. It was also fully backed when it was announced London had beaten rival Paris for the Games, and 74 percent of the public would welcome another Games in the future.

However, that is a scenario that Vietnam can only dream of.

A recent poll by Tuoi Tre revealed that 84 percent of the Vietnamese people do not support the nation organizing the 2019 Asiad. Similar polls all point towards a firm NO. The people also suggest that Vietnam return the Games rights and pays a fine instead.

Instead of being swayed by romantic notions of hosting a successful Asian Games competition, the pragmatic Vietnamese people only see it as a costly exercise that will only worsen the nation’s economy.

Apparently Hong Kong sought out public opinion before withdrawing their bid for the 2019 Games, and some people in Vietnam believe that would have nipped the bid in the bud and saved the nation this current predicament.

The public is so crucial to this whole thing, which is why the Prime Minister wants the plan to be transparent so that everyone can have their say on its merits and faults.

It is not just the public who are concerned about the cost and the possibility of the white elephant stadia littering the nation, after the Games are long gone, and being unused and derelict, which is what happened after the nation hosted the Southeast Asian Games in 2003, a far smaller event with less cost and less risk.

Government officials are also saying that the repeated figure of US$150 million will be nowhere near enough to host the Games. Most people agree with that. The Ministry of Planning and Investment refuses to back the Games, while the investment ministry has already sent documents to the sports ministry to confirm that $150 million will definitely not be enough to organize the event.

The former chairman of the Vietnam Olympic Committee, Ha Quang Du, also says hosting the Games will be a big mistake and he is supported by Deputy Prime Minister Vu Duc Dam.

To put the $150 million figure into perspective, the Republic of Korea spent $2.9 billion on the 2002 Asiad in Busan, Qatar spent $2.8 billion hosting the Asiad in Doha in 2006 with China coughing up a whopping $20 billion for the 2010 Asiad, including $2.45 billion for the construction of the athletes’ village alone.

Everyone in Vietnam wants the Games to cost as little as possible but there is no point banding about a figure which will end up being a mere fraction of the final cost. Why don’t those in the know just admit it will cost $1 billion now? And maybe there can be a debate about whether the nation should host the Games or hold its hand up and say ‘Sorry, we can’t do it’ and then pay the fine and get on with other things.

Something which is also worrying the public is the white elephant factor and the fact that of the 36 sports being held at the Games, many are unfamiliar to Vietnam and require new and costly infrastructure like track cycling, equestrian, hockey, baseball, cricket and American football. No one in Vietnam plays these sports with no facilities ready. Apparently some competing nations have offered Vietnam loans to organize sports common in their country but that is more debt which I am sure nobody wants.

We can debate how much it is going to cost and who is for or against it but the one fundamental thing remains, without public backing can the nation realistically host a successful Asian Games?