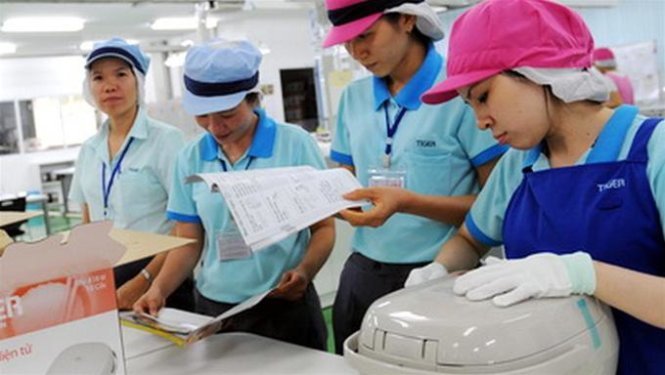 Editor’s note: Le Hoang Viet Lam, 33, joined the “Ky Vong Viet Nam 20 Nam Toi” (“My Expectations for Vietnam in 20 Years”) writing contest with an aspiration that Vietnamese female workers will gain better access to rights and benefits, just as their male counterparts have, in the next two decades.

Female workers account for a substantial portion of human resources. They have always been doted on since 1982, when Vietnam ratified the Convention on the Elimination of All Forms of Discrimination against Women (CEDAW). Adopted in 1979 by the United Nations General Assembly, CEDAW is often described as an international bill of rights for women.

Most recently, women’s rights were also safeguarded by the 2013 Labor Code.

However, due to their physical features, maternal function and family caretaking, female staff members do not enjoy very auspicious conditions compared to their male colleagues.

Though Vietnamese labor rules are adequate regarding protecting female employees’ rights and benefits, most of these rules are unfeasible.

In reality, not a few female workers have resigned themselves to contract terms which infringe on their rights and benefits, such as not getting married or giving birth until after a number of years.

Research by the Vietnam Trade Union University revealed that 4.4 percent of employment contracts stipulate that female staffers not give birth within a certain number of years. Meanwhile, 4.34 percent require that the women voluntarily terminate their contracts upon marriage, while another four percent request their female candidates to delay marriage for a number of years.

The research also pointed out that many businesses have infringed on their female employees’ health care and salary regimes, and particularly working and rest hours.

I once taught a subject called Fundamental Law, which includes a lesson on Labor Law, to workers at industrial parks and colleges in Binh Duong Province, and I myself know that the stark fact exists.

Another saddening reality is that most female workers are confined to their “eat-go to work- sleep” routines.

Enterprises’ infringements on their staff’s working hours not only adversely impact their health, but also deprive them of opportunities to get to know and fall in love with members of the opposite sex and get married. Therefore, many female workers get married late, engage in premarital sex or cohabit with their lovers, all of which has brought about insidious consequences.

I aspire that along with the country’s numerous strides in the next 20 years, female workers’ rights would be ensured by a powerful legal system and social institution. In actuality, female employees’ rights are among humans’ basic rights.

Their working and rest hours would then be paid due attention to. They would be entitled to the same salaries, treatment and health care policies as their male colleagues, and also be allowed time to get to know and love the men who they will later wed. Women would also work in friendly, wholesome environments, and have opportunities to study and improve their skills.

They would no longer be fired for no reason at all, prone to sexual harassment or abuse, or sign employment contracts with unreasonable terms. They would also stop feeling they are an underprivileged group. These would motivate them to dedicate their energy to their companies’ sustainable growth.

The state, with its corruption-free apparatus and officials of high integrity, is supposed to play their role well. The rights, benefits and obligations of four subjects, namely female workers, labor users, trade unions and the state should be taken into close consideration.

In such a correlation, the state ensures benefits, while businesses and female workers create profits and trade unions safeguard the profits.

Therefore, the state needs to inspect legal rules and revise them to guarantee a seamless link between these four subjects’ rights, obligations and benefits. A proper legal framework should be set up to oblige business owners to abide by rules regarding female workers and perform their corporate liabilities toward the society.

Incentives should also be boosted for businesses which employ a large number of female workers as “legal incentives for female workers lead to businesses incurring an increase of 10 to 15 percent in their corporate expenditure which is meant for their female staff compared to that for males.”

Meanwhile, competent agencies need to work out specific plans in educating female employees on their rights and responsibilities by organizing training courses in how to exercise their rights, and report businesses’ violations regarding female staff to trade unions and relevant agencies.

It’s essential that trade unions at different levels implement a sound mechanism to receive female staff’s feedback and tips-off, such as providing an email address, conducting surveys on public opinion, and working closely with the media to make public rule violations so as to create “public pressure” to better guarantee female workers’ rights and benefits.

In addition, trade unions should join hands with competent agencies and scientists in carrying out sociological surveys for quantitative information and analysis regarding the implementation of female employees’ rights on such criteria as their working and rest hours, medical care and insurance, as well as social insurance and welfare.

Trade unions then pool the women’s aspirations and worries, and urge the state to perfect its legal system and tackle rule violations.

In my opinion, it’s critical that trade unions be separated from business owners. The unions are intrinsically workers’ real representatives, who are tasked with safeguarding staffers’ legal rights and benefits. If trade unions are run by enterprises, it’s inevitable that the unions are affected by the firms.      Once these aforementioned solutions are implemented, I believe my expectations for the improved assurance of female workers’ rights and benefits in 2035 will turn true.