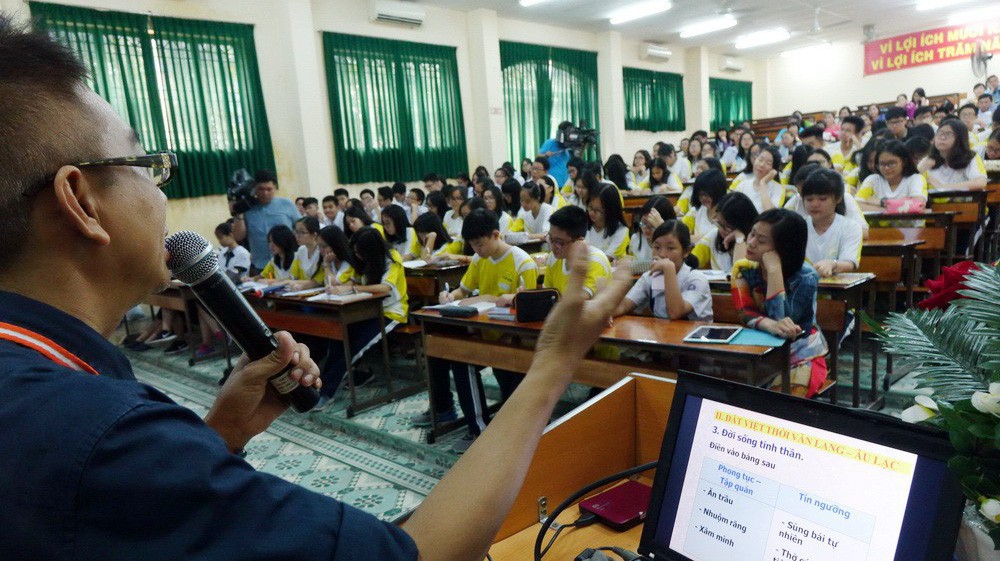 Editor’s note: Bui Duc Tien is a lecturer at the Ho Chi Minh City University of Education. He holds an M.A. in applied linguistics and a B.A. in English language teaching. He is also a teacher trainer for internationally recognized TESOL certificates issued by Horizon TESOL. In addition, he is involved with the multinational U.S.-sponsored Lower Mekong Initiative (LMI) as a member of the Community of Practice (COP) in Vietnam. He wrote this piece for Tuoi Tre News on the occasion of Teachers’ Day (November 20).

Recently, Vietnamese social media users have been sharing people’s opinions on the nobility of teaching, the responsibilities of pedagogues, and what will make for the best Teachers’ Day. Personally I’m not too much of an old hand at the profession, but having worked with students of various types and ages, as well as had colleagues both domestic and international, I’ve formed some concrete opinions of my own.

The image of teachers in Vietnam has always been that of the utmost intellectual status. In the past, teachers were placed before parents, and just below the emperor in terms of social standing, importance and their contribution to a child’s development. Proverbs of old tell the Vietnamese that without a teacher, one will get nowhere fast, and that if parents want their children to grow academically, they must treat their teachers well.

The teaching profession has long been called ‘the most respected job’ in Vietnam. According to the Vietnamese, even if you’ve only taught someone half a word, you’ve already earned yourself the title ‘teacher.’

But is teaching still seen as noble? As far as I can tell from my own workplace, the level of nobility and respect given to so-called ‘ferrymen’ (the Vietnamese would often compare teaching to the act of carrying someone across a river on a ferry – surpassing obstacles to reach the far-flung shore) has dwindled.

I’ve noticed recently that some of my college students avoid giving me a proper greeting, for example. As children, every single Vietnamese is taught to show respect for the elderly and for their teachers, the most obvious sign of which is a small bow with folded arms before every encounter. As people age such formalities become obsolete, with a slight smiling nod normally sufficing. However, even this has become somewhat tentative.

I came to class one Wednesday this semester. It was 6:55 am. I noticed some students seated that were wide awake, some were breaking their fast, and some staring ahead blankly. Others were fixated on tiny phone screens. However, none of them bothered to even raise an eyebrow the moment I stepped into the classroom. I stood right there looking at them, only to find myself apparently invisible.

I thought to myself: “Perhaps they are shy,” but it turned out that the same thing would happen every day. Worse though, I had to repeatedly ask these so-called grown-ups to ‘get me a microphone please,’ almost every class. And they never cleaned the board, nor brought in the chalk or the dust cleaner.

Similar things had happened before, and when I asked around for my colleagues’ comments, they shared their own stories in disappointment. What distresses me most, though, is that some of these students are pre-service teachers! How will they feel in the future when they are in the same position I am?

While they do not represent the majority, this type of attitude has grown over the last few years.

There are no official statistics, but Vietnamese people blame teachers for everything that is wrong with their children. Too many responsibilities have been transferred to teachers, both in print and tacitly, surely striking novice practitioners dumb. The myth “I don’t want to work hard, so I’ll be a teacher” is a misconception I’ve heard so many times from young people. The job might be noble, but it’s definitely no bed of roses.

University lecturers like myself conduct classroom teaching and are encouraged (sometimes officially required) to do research. Some shoulder more responsibilities like assisting the Youth Union, maintaining a school-wide Learning Management System (an online learning platform like Moodle), making teaching schedules every new semester, photocopying test materials during examination times (yes this is the job of a college lecturer!), and dozens of other behind-the-scenes tasks.

High school teachers, from my experience, are up to their ears not only with teaching itself, but with the paperwork that precedes and follows. They are requested to formally record their lesson plans for inspection, to track students’ performance in detail, to provide feedback to each of their 350-500 or so students on every one of their test papers, to transfer scores manually from one document to the next, and to write up all kinds of reports on a weekly, monthly and yearly basis.

Teachers in general are expected not only to deal with the intellectual side of their students, but also their moral values. Children might spend more time at school than at home these days (Vietnamese students in many schools are in class for up to eight hours a day), but the time they spend with ONE teacher is nothing compared to the number of hours they are with their parents. Isn’t it funny then that whenever a child errs, adults are quick to ask: “Did your teacher teach you to do that?”?

Disciplinary issues should involve multiple stakeholders, especially when teachers’ salaries are unspeakably low! Despite five years of experience and an M.A. in applied linguistics, I earn US$241.06 a month as a lecturer at a master teacher’s college like Ho Chi Minh City University of Education.

What makes my day?

As I said, Teachers’ Day to me is not that special, and best wishes on social media or an SMS should suffice. A bunch of flowers will of course be deeply cherished, but respect displayed for a day is a waste if respect is away on every other day.