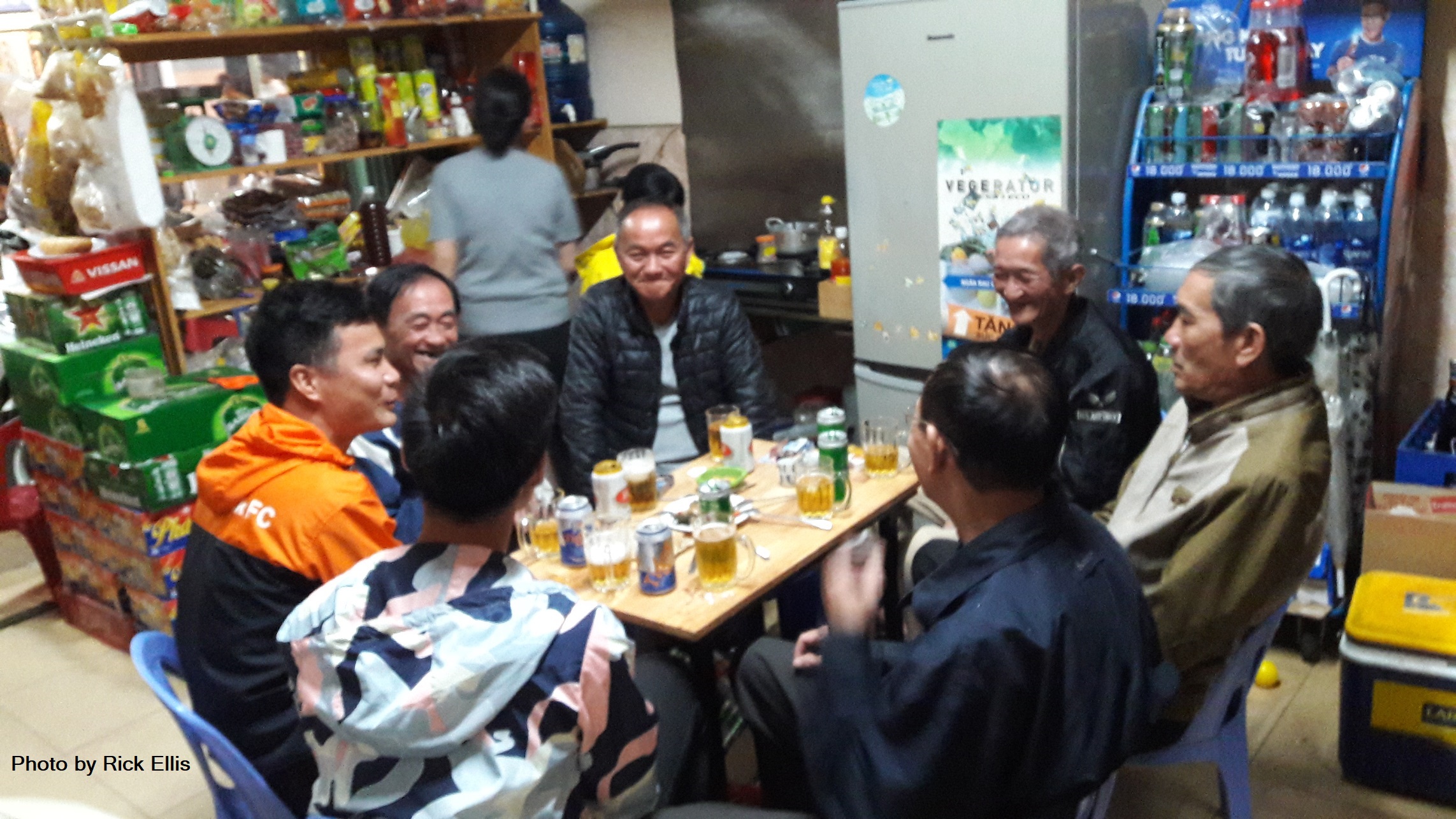 Recently I called into one of my preferred coffee shops where I know the staff and some of the customers. The people here in the Central Highlands are friendly to the point of being downright chummy - it’s provincial and laid back, so it’s easy to get to know people.

On the left in the photo below is the morning server, center is the grandma of the young man who manages the café, and on the right is “Superwoman Lottery Lady," who I know well and have written about on previous occasions. That Superwoman is one of my heroes in life, but her story is for another day.

It amuses me to no end that grandma and Superwoman hang out in the café just because they’re buddies. Neither one is a customer, nor do they have duties, yet they belong, they’re welcome to mingle. They haven’t been relegated to a back room, removed from the lively atmosphere and youth in the café, rather they’re right in the midst of the action.

I guess the server is around 20 years old, and I know Superwoman is 90 because she told me so (hence her nickname - God knows how many kilometers she walks every day selling her tickets), and grandma must be pushing 80, so that’s as big an age gap as it can be found in any trio of friends.

It was late morning and the café wasn’t busy, so the three women were chattering away a mile a minute. I’ve seen them carry on many times and always noticed the lively pace and excitement of their exchanges!

They’re not boring “How are you?” conversations at all - they’re very close chums, peers, and equals when exchanging news and ideas. Anyone listening in on the conversation but not seeing the three of them would never guess that there are huge differences in age.

In Western countries relationships between generations are often more formal and dignified, for good reason. Families are victims of great distances, with many people living hundreds or thousands of kilometers from their loved ones, and that’s been the norm for decades.

Most clans actually feel very blessed if they can get the extended family together once a year, usually to celebrate the holiday season late in the year.

My generation has more education than our parents had, and that brings independence, economic power, and opportunities resulting in many young people moving to different parts of the country and the world to seize the best career prospects. I moved halfway around the world in my early 20s and the only person in my entourage who was miffed about it was my father (“Why the hell do you want to go all the way over to Europe?”) but I found a way to visit my family nearly every year.

Those factors have discreetly conspired to weaken the average family’s cohesiveness in developed Western countries but here in Vietnam tradition still reigns - at least to some degree.

Recently I was in the local neighbourhood's after-work beer joint and the gang was joined by a couple of spiffy young men in their early 20s. The young guys, nephews of one of the group, jumped up to greet me as if I was a long lost friend suddenly reappearing on the scene. Those kids were really fun, injecting plenty of energy and a positive buzz to the session.

That group spent the entire time exchanging lively banter, laughing and joking as if there would be no tomorrow, reminiscent of a bunch of old school chums rekindling memories. The regulars are all well into their 60s, so we’re talking about age differences of around 40 years.

The same ambience as with the ladies in the café stood out in the din of the Happy Hour beer joint. Just like in the coffee shop, if I had heard the conversation but not seen the participants, I would never have guessed the large age differences around the table.

There was an atmosphere of friendship, informal and relaxed, not as if the young guys were stuck in a session with a few boring old farts.

The camaraderie between youth and elderly in Southeast Asia has always fascinated me, especially in Vietnam, where bonds often seem slightly more cemented than in some neighbouring countries.

Most families here have persevered through tough times over the years - less than three decades ago the majority of the population here lived in poverty. We Westerners from developed countries can barely fathom such a life, nor can we grasp how that type of sharing and survival makes families more tightly knit.

Imagine what most of the generation above 60 years of age in Vietnam have had to deal with on top of the poverty: wars, invasions, and colonial shackles - it hasn’t been a smooth ride by any means.

Living conditions here are usually conducive to closer relationships as is the case in any developing country. Many elderly still live in the same house as their children and grandchildren - where else would they go?

We’re not talking about the same neighbourhood, city, or province - they’re actually still in the same house! That’s a rarity by Western standards these days, but in Vietnam it’s common that children stay in the family home until they marry or move for work.

The concept of everyone under the same roof began fading decades ago in highly developed countries when retirement communities and special residences for the elderly were established. Careers and progress came first with many parents barely able to juggle jobs and children, so grandparents were relegated to the background.

That’s not all bad by any means: The elderly get the care and attention they need in retirement residences, have peers to socialize with, as well as many activities to keep them on the go. The downside is the elderly are often out of circulation - not in sync with the fast-paced, stressful life on the outside, and typically don’t get the time and attention they merit from their families.

What goes around, comes around, and no doubt the day will also come here in Vietnam where special elderly residences are the norm, but it’s going to be a while before tradition gives in. Meanwhile, it has become increasingly difficult for many family units to remain intact.

Young Vietnamese migrate increasingly to the large urban areas because they have more specialized education and that’s where their skills are in demand. I know scores of young professional types who live on their own in the big cities and scurry home to enjoy holiday occasions with the family, seizing every valuable moment.

That’s the price everyone must pay, squeezing in those few days per year to be with the family, putting up with travel hassles, and returning to the city to a big pile of work. That works - more or less, but only as long as their parents are healthy and able to care for themselves.

When health issues begin something has to give, and there isn’t always a family member in the home able to care for the parents. There is no magical solution, so, sooner or later, ageing parents will become a big social issue here, and in many families it’s already the case.

Next day I was headed up a steep Da Lat incline on foot and spotted a vendor struggling to push her steamed corn-laden bicycle up the hill. Two young women looking trendy and slick were walking behind the vendor, probably they were vacationers from one of the big cities on a summer junket to Da Lat.

The women spotted the vendor and hurried up the hill to catch up to the bicycle and give the elderly vendor a helping hand.

Isn’t that cool? My heart jumped when I saw that trio!

Life will evolve as always with “progress” winning out. The world gets busier, people more stressed out and indifferent toward each other, but hopefully young people like those two women will always appear to help the elderly up the steep hills.