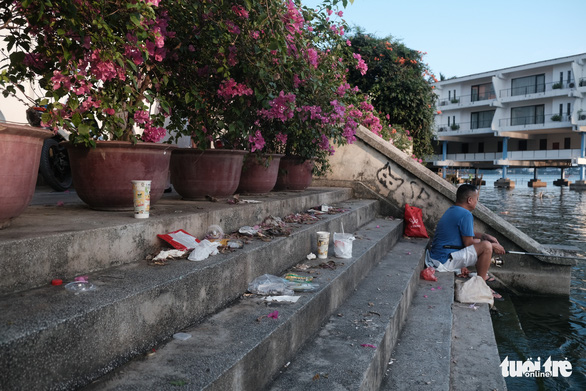 Editor’s note: “I wish that the people who live here love Vietnam very much and that love is not going to allow them to throw garbage on the soil of Vietnam,” Camila Villegas from Colombia shared her thoughts about littering habits in Vietnam with Tuoi Tre News.

Villegas’ comments were made at a request from Tuoi Tre News after news that residents of a lakeside neighborhood, home to an emerging Instagrammable spot in Hanoi, have been complaining about young people flocking to the area for photos, making noise while leaving nothing but trash behind.

The following comments were edited by Tuoi Tre News for clarity, consistency, and coherence.

It has been three years since we moved to Vietnam because of a job offer my huband recieved. Many Westerners have no idea what Vietnam looks like and all we know [about the country] is the war. I was one of them; I will not lie.

But once you get here, the country catches you in a very special way. You feel like you want to know more and experience the local culture. Everything is so different and exotic that I feel there will never be enough time to learn everything about Vietnam. My husband and I fell in love with this country, and that is why we feel that we must support Vietnam as much as we can so that the country can improve. That includes the issue of the environment.

I like to travel a lot to beaches like Mui Ne, Vung Tau, and Ho Tram and we always make big groups of foreigners to spend 2-3 hours cleaning the garbage in the sea and on the beach, sometimes locals will join us when they see us doing it. But sometimes they also make fun of us or just throw more garbage.

In the past, when I was on the beach as well as tourist areas here in [Ho Chi Minh City] like Ben Thanh Market and the surrounding area of District 1, if I saw someone throwing garbage on the streets I would ask them to pick it up and throw it in a can.

In a few cases, people felt ashamed and picked it up; sometimes they picked it up and threw it again when they were away from me; but usually people got really upset and insulted me or shouted at me. That hurt my feelings a lot so I stopped.

Now I don’t say anything and I don’t do anything if I see someone littering on the streets. I just do my own part to never throw garbage and clean up some spaces myself like at the park or the beach. If I see litter on the streets, I used to care a lot and wanted to help but now I just step aside.

Now I hope if children see me picking up trash, maybe one of them will do it themselves later. If I'm on the beach picking up trash and someone joins me, I feel happy because maybe that person will do it alone later. Don't get me wrong, I’m here to learn about Vietnam, not the other way around. But if I can share some good examples that I know will be helpful, that makes me feel like I can help.

I wish that the people who live here love Vietnam very much and that love is not going to allow them to throw garbage on the soil of Vietnam. Because that’s how I feel: I love Vietnam, so I take care of it because it’s my home.

The beautiful places in Hanoi where people go to take photos are very crowded; many people gather to hang out and take their food and drinks there to be with family and friends. That’s no problem. The problem is that afterward they forget to pick up the garbage and leave the place clean so that more people can enjoy it.

I think that people dirty the streets because they have not been taught the importance of the environment and the advantages of having a clean city. There should be more education and enforcement of the laws so people can learn.

I think they should do a lot of campaigning about cleaning, garbage disposal, and taking care of the city and tourist places. Clean streets also attract tourism and businesses, which is good for Vietnam and for its people.

Campaigns against littering must be everywhere: at schools, in the workplace and on the streets, and must always be accompanied by laws, so people can know the information and apply it.

In my country, Colombia, people used to throw a lot of trash on the ground 30 years ago, but they began to carry out many campaigns in schools and on public roads. In addition to that, new laws and fines were enforced.

People learned so much about cleanliness that almost nobody litters today. If you do that, it is possible that people on the streets will do ‘public shaming’ and force you to take your trash and put it in a bin. It is very embarrassing.

If a police officer sees you doing it, depending on the amount of trash, you can be fined or go to jail. In any case, people do not litter simply because they would be very embarrassed to be seen and exposed. They know that it is their home and they should not dirty it.